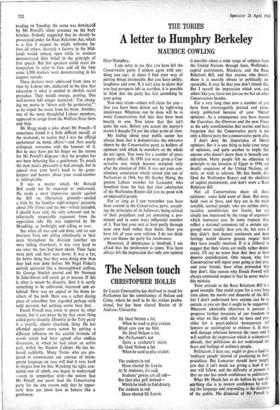 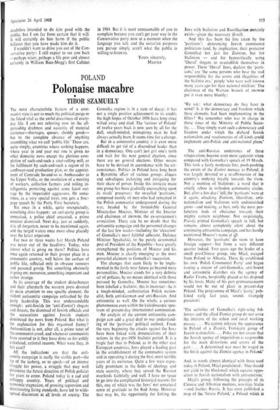 A letter to Humphry Berkeley

Dear Humphry, I am sorry to see that you have left the Conservative party. I seldom agree with any- thing you say : at times I find your way of putting things intolerable. But you have ability, toughness and tone. If it isn't easy to claim that you had prospects left to sacrifice, it is possible to think that the pasty has lost something by your going.

You may claim—others will claim for you— that you have been driven out by right-wing intolerance. Whatever can be done will be to make Conservatives feel that they have been beastly to you. You know that this isn't quite the case. Before you accept the martyr's crown I thought I'd put the other point of view.

My feeling about your public career has always been that it demonstrates the tolerance shown by the Conservative party to holders of opinions with which its members on the whole do not agree. You were for a number of years a party official. In 1956 you were given a Con- servative seat which became marginal only after the election of 1964. It was not your con- stituency association which turned you out of Parliament in 1966, but Mr Stanley Henig, the present Labour member for Lancaster, who benefited from the fact that your admiration of the Wolfenden Report did you no good with an ungrateful people.

For as long as I can remember you have been around in the Conservative party, assault- ing the principles of its followers, being critical of their prejudices and yet remaining a pro- minent and in some ways influential member of it. You lost your seat at least partly through your own fault rather than theirs. Now you have left of your own volition. I do not think you can blame the party for intolerance.

Moreover, if intolerance is involved, I am afraid that the intolerance is yours. You have always left the impression that only one opinion is possible about a wide range of subjects from the United Nations through Suez, Wolfenden, capital punishment, Rhodesia and the Race Relations Bill, and that anyone who doesn't share it is morally obtuse or politically un- speakable. It may be that you don't intend this. But I record the impression which you, and others like you, leave not just on me but on other Conservatives besides.

For a very long time now a number of you have been extravagantly praised and exten- sively publicised because of your 'liberal' opinions. As a consequence you have treated the GUardian, the Observer and the new Times as the only constituencies that matter and have forgotten that the Conservative party is not only a liberal party but a conservative party also.

I don't deny the importance of liberal opinions. But it is one thing to hold your range of opinions, and quite another to imply that anyone who doesn't share them is beneath con- sideration. Many people felt no objection of principle to the invasion of Egypt in 1956, are deeply suspicious of the United Nations, ad- mire, or wish to tolerate, Mr Ian Smith, dis- liked the Wolfenden Report and the abolition of capital punishment, and don't want a Race Relations Bill.

Not all Conservatives share all these opinions : some hold none of them. But many hold -post of them, and they are in the main sensible, normal people, who are neither dotty, racialist, antediluvian, nor fascist, but are simply not impressed by the range of argument which impresses you. In some respects they reflect a national consensus (of a certain age- group) more readily than you do, but even if they didn't, their honest sentiments and deep feelings would deserve greater respect than they have usually received. If it is illiberal to suggest that their views are really rather demo- cratic, I'll say no more than that they at least deserve consideration. One reason why few Conservatives will regret your going is that you, and your friends, have often pretended that they don't. One reason why Enoch Powell will always command respect is that he never makes this mistake.

Your attitude to the' Race Relations Bill is a good example. One could argue for a very long time about the merits and demerits of the Bill, but I don't understand how anyone can be as certain as you are that it ought to be supported. Whatever admirable objectives it pursues it proposes further invasions of our freedom to do what we like with what we have and pro- vides for a quasi-judicial bureaucracy (of lawyers or sociologists) to enforce it. It may well damage relations between the races and it will confirm the impression which is widespread already, that politicians do not understand the fears and feelings of ordinary people. Politicians, I dare say, ought to give a lead to 'ordinary people' instead of pandering to their prejudices. But Lancaster should have taught you that it isn't much use giving a lead if no one will follow, and the difficulty at present is that no one has much confidence in politicians. What Mr Heath has to do before he can do anything else is to restore confidence by talk- ing the language and responding to the instincts of the public. His dismissal of Mr Powell is doubtless intended to do him good with the public, but I am far from certain that it will. It will certainly do him harm if the public believes that you have made him do it.

I wouldn't want to drive you out of the Con- servative party : I still expect to see you back —perhaps wiser, perhaps a life peer and almost certainly in William Rees-Mogg's first Cabinet

in 1984. But it is most unreasonable of you to complain because you can't get your way in the Conservative party now at a moment when the language you talk and the sectarian purposes you pursue simply aren't what the public is willing to listen to.