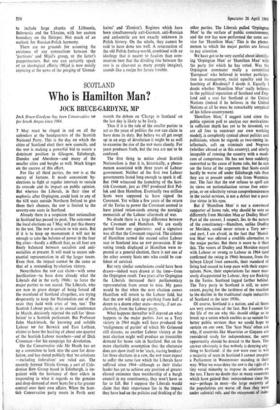 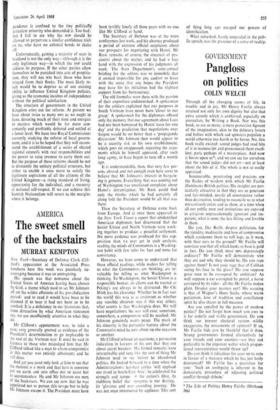 Who is Hamilton Man?

lock Bruce-Gardyne has been Conservative PAP for South Angus since 1964.

7 May must be ringed in red on all the calendars at the headquarters of the Scottish National Party. This is the day on which the cities of Scotland elect their new councils, and the SNP is making a powerful bid to secure a dotninant position in Glasgow, Edinburgh, Dundee and Aberdeen—and many of the smaller cities and burghs as well. Much hinges on the success of this effort.

For like all third parties, the SNP is at the mercy of fortune. It needs convenient by- elections to fight at regular intervals to sustain its crusade and its impact on public opinion. But whereas the Liberals, in their time of euphoria after Orpington, could look to any of the 618 seats outside Northern Ireland to give them their chances, the SNP is limited to the seventy-one seats in Scotland.

Already there is a suspicion that nationalism in Scotland has passed its peak. The outcome of the local elections on 7 May will put this theory to the test. The SNP is certain to win seats. But if it is to keep up momentum it will not be enough to take the balance of power in the four big cities—hardly a difficult feat, as all four are finely balanced between socialists and anti- socialists at present. It will need to secure sub- stantial representation in all the larger towns. Even then, the impact cannot be the same as that of a resounding by-election victory.

Nevertheless the SNP can claim—with some justification—to have done already what the Liberals did in the early 1960s: to force the major parties to run scared. The Liberals, who are now in grave danger of being forced off the mainland of Scotland altogether, are trying desperately to keep the Nationalists out of the seats they hold with cries of 'me, too.' The Scottish Labour party, at its annual conference in March, decisively rejected the call for 'devo- lution' to a Scottish parliament. But Professor John Mackintosh, the knowing and voluble Labour MP for Berwick and East Lothian, claims to have the backing of about one-quarter of the Scottish Labour members—and of Dick Crossman—for his campaign for devolution.

On the Conservative side Mr Heath has set up a committee to look into the case for devo- lution, and has stated publicly that 'no solutions —including federalism' are ruled out. The recently formed Thistle Group,_ a sort of Cale- donian Bow Group based in Edinburgh, is im- patient with the hesitancy of their elders in responding to what it regards as the genuine and deep demand of most Scots for a far greater control over their own affairs. When the Scot- tish Conservative party meets in Perth next month the debate on 'Change in Scotland' on the last day is likely to be lively.

The first thing to notice about Scottish Nationalism is that it is, historically, a pheno- menon associated with three years of Labour government. Neither of the first two Labour governments lasted long enough to spark it off. But 1948 witnessed the launching of the Scot- tish Covenant, just as 1967 produced first Pol- bk and then Hamilton. Eventually two million Scots were supposed to have signed the Covenant. Yet within a few years of the return of the Tories to power the Covenant seemed to have joined ration-cards among the nostalgic memorials of the Labour aftermath of war.

No doubt there is a large difference between the Covenant and Hamilton. We are easily parted from our signatures: and a signature was all that the Covenant required. The citizens of Hamilton turned the second safest Labour seat in Scotland into an SNP possession. If the' voting trends displayed at Hamilton were re- peated at a general election, there is not one of the other seventy Scots MPS who could be con- fident of survival.

But very similar conclusions could have been drawn—indeed were drawn at the time—from the Orpington result. Two years after Orpington the Liberals increased their parliamentary representation from seven to nine. My guess would be that when the next election comes Hamilton will return to the Labour fold, but that the SNP will pick up anything from half a dozen to a dozen other seats—mostly, if not ex- clusively, from the Labour party.

What happens thereafter will depend on what happens to the major parties. Just as a Tory victory in 1964 might well have produced the `realignment of parties' of which Mr Grimond still dreams, so another Labour victory at the next election might well produce an irresistible demand for home rule in Scotland. But on the more charitable assumption that the electorate does not show itself to be 'stark, staring bonkers' for three elections in a row, the SNP must expect to suffer the same fate which the Liberals have suffered since 1964—although as their titular leader has yet to achieve any position of greater elected eminence than membership of a burgh council in my constituency, they won't have so far to fall. But I suppose the Liberals would claim that their importance lies in the impact they have had on the policies and thinking of the other parties. The Liberals pulled 'Orpington Man' to the surface of–public consciousness, and the SNP has now performed the same ser- vice for 'Hamilton Man.' This is the pheno- menon to which the major parties are forced to pay attention.

We have got to be very careful about identify- ing 'Orpington Man' or 'Hamilton Man' with the party for which he has voted. Was the Orpington commuter really a committed `European' who believed in worker participa- tion in management, racial equality and the bombing of Rhodesia? I doubt it. Equally I doubt whether 'Hamilton Man' really believes in the pylitical separation of Scotland and Eng- land and a seat for Scotland at the United Nations (indeed if he believes in the United `Nations at all he must be remarkably untypical of his fellow-countrymen).

'Hamilton Man,' I suggest (and since the public opinion poll to analyse our motivations in sufficient depth has yet to be invented, we are all free to construct our own working model), is completely cynical about politics and politicians, whom he regards as two-timing in- tellectuals, soft on criminals and Negroes (whether abroad or in this country), and utterly incapable of running the country with a modi- cum of competence. He has not been suddenly converted to the cause of home rule, but he can see the force of the argument that Scots could hardly be worse off under Edinburgh rule than they are at present under rule from Westmin- ster. The fact that the SNP refuses to spell out its views on nationalisation versus free enter- prise, or on selectivity versus comprehensiveness in the social services, is not a defect but a posi- tive virtue in his eyes.

But if 'Hamilton Man' is not a convinced supporter of home rule, why should he vote so differently from Meriden Man or Dudley Man? Part of the answer, I suspect, lies in the nature of the constituency—Hamilton, unlike Dudley or Meriden, could never return a Tory me— and part, I am afraid, in the fact that 'Hamil- ton Man' was offered a credible alternative ,to the major parties. But there is more -to it than this. The voters of Dudley and Meriden stayed with Labour or swung to Labour in 1964 (and confirmed the swing in 1966) because, from the Selwyn Lloyd frost onwards, their standard of living had ceased to keep pace with their expec- tations. Now, their expectations far more mas- sively disappointed by Labour, they are flocking to the Tories. Scotland lagged farther behind. The Tory party in Scotland is still, to some extent, paying for the tardiness of the reaction to the decline in the traditional staple industries of Scotland in the later 1950s.

Of course, Scotland is a nation, and all Scots are very conscious of the 'fact. But I cannot for the life of me see why this should oblige us to break up a union which enables us to sustain far better public services than we could hope to sustain on our own. The 'Scot Nats' often ask why, if countries like Mauritius or Guyana are considered ready for independence, the same opportunity should be denied to the Scots. The answer obviously is that nobody is denying any- thing to Scotland : if the SNP were ever to win a majority of seats in Scotland I cannot imagine a Parliament in Westminster standing in their way. What we must deny the SNP is the right of a tiny vocal minority to impose its solutions on the rest. I have no doubt that in many countries which have gained their independence since the war—perhaps in most—the large majority of the populations are worse off than they were under colonial rule, and the enjoyment of inde-

pendence is confined to the tiny politically

articulate minority who demanded it. Too bad: but I fail to see why the SNP should be

allowed to perpetrate a similar confidence trick on us, who have no colonial bonds to shake off.

Unfortunately, gaining a majority of seats in Scotland is not the only way—although it is the

only legitimate way—in which the SNP could

achieve its purpose. If the other parties allow themselves to be panicked into acts of propitia- tion, they will not win back those who have strayed from their flocks. The most likely re- sult would be to deprive us of our existing ability to influence United Kingdom policies, giving us the economic incubus of independence without the political satisfaction.

The structure of government in the United Kingdom cries out for reform. At present we

• have about twice as many MPS as we ought to have, devoting much of their time and energies

to matters which would be far more con- veniently and profitably debated and settled at a lower level. We have two Royal Commissions currently studying the reform of local govern- ment, and it is to be hoped that they will recom- mend the establishment of a series of elected regional councils with real responsibilities and the power to raise revenue to carry them out. But the purpose of these reforms should be not to dismantle the unitary political structure, but rather to enable it once more to satisfy the legitimate aspirations of all the citizens of the United Kingdom—a rising standard of living, opportunity for the individual, and a recovery of national self-respect. If we can achieve this Scottish Nationalism will revert to the margins where it belongs.