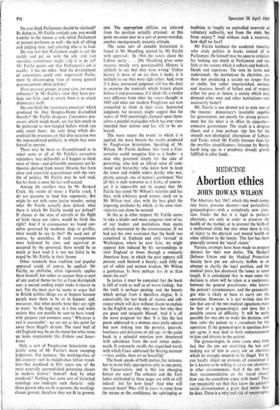 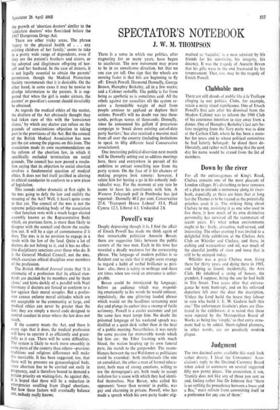 The Abortion Act, 1967, which this week comes into force, presents doctors—and particularly gynaecologists—with a completely new situa- tion. Under the Act it is legal to perform abortions, not only in order to preserve the health of the mother, or to prevent the birth of a malformed child, but also when there is risk of injury to the physical and mental health of other children in the family. This last has been generally termed the 'social clause?

Various attempts have been made to prepare doctors for their new duties. The Medical Defence Union and the Medical Protection Society have put out advisory leaflets in an attempt to clarify the legal position, and the medical press has discussed the issues at some length. It is anticipated that in most cases the decision to abort will be taken at a conference between the general practitioner, who knows the patient's circumstances, and the gynaecolo- gist who is likely to have to carry out the operation. However, it is not written into the law that one of the two medical signatures must be that of a gynaecologist, and here lies a possible source of difficulty. It will be quite possible for two GPS to make the decision, and then refer the patient to a consultant for the operation. If the gynaecologist in question does not agree, it may lead to both embarrassment to him and distress to the patient.

The gynaecologist, in some cases, may even feel that the aes are stretching the law and making use of him to carry out an abortion which he strongly suspects to be illegal. Yet he can hardly object on grounds of conscience if he is known to be willing to carry out abortions in other circumstances. And if the oes base their recommendation on the 'social clause' how can the consultant argue with them? They can reasonably say that they know the patient's social circumstances a great deal better than he does. There is a very real risk of encouraging the growth of 'abortion doctors' similar to the 'addiction doctors' who flourished before the 1967 Dangerous Drugs Act.

There are other tricky areas. The phrase 'injury to the physical health of . . . any existing children of her family,' seems to take in a pretty wide range of dependents, even if they are the patient's brothers and sisters, or the adopted and illegitimate offspring of her- self and her husband. In the case of minors, it is not legally essential to obtain the parents' permission. though the Medical Protection Society recommends that it is desirable. On the other hand, in some cases it may be unwise to divulge information to the parents. It is sug- gested that when the girl is under sixteen, the parents' or guardian's consent should invariably be obtained.

As regards the medical ethics of the matter, the drafters of the Act obviously thought they had taken care of this with the 'conscience clause,' by which any doctor can refuse on the grounds of conscientious objection to taking part in the provisions of the Act. But the council of the British Medical Association has now put the cat among the pigeons on this issue. The association made its own recommendations on the reform of the abortion law, in which it specifically excluded termination on social grounds. The council has now passed a resolu- tion saying that its objection to social abortion involves a fundamental question of medical ethics. It does not feel itself justified in altering its ethical standpoint to conform to a new piece of legislation.

This sounds rather dramatic at first sight. Is the BMA going to defy the law and stultify the meaning of the Act? Well, it hasn't quite come to that yet. The council of the BMA is not the supreme policy-making body of the association —that function rests with a much larger elected assembly known as the Representative Body which, on previous form, is more than likely to disagree with the council and throw the resolu- tion out. It will be a sign of commonsense if it does. The BMA is in no position to engage in a tussle with the law of the land. Quite a lot of doctors do not belong to it, and it has no effec- tive disciplinary sanctions over those who do. It is the General Medical Council, not the BMA, which exercises ethical discipline over members of the profession.

The British Medical Journal states that 'it is axiomatic of a profession that itq ethical stan- dards are decided by its members and by them alone,' and hints darkly of a parallel with Nazi Germany if doctors are forced to conform to a law against their moral scruples. But a profes- sion cannot enforce moral attitudes which are not acceptable to the community at large, and medical ethics can never be greater than the law; they are simply a moral code designed to control conduot in areas where the law does not reach.

If the country wants the Act, and there is every sign that it does, the medical profession will have to operate it as efficiently and grace- fully as it can. There will be some difficulties. The system is likely to work more smoothly in Some parts of the country than others—previous traditions and religious differences will make this inevitable. It has been suggested, too, that there will be pressure on gynaecological beds, since abortion has to be carried out early in Pregnancy, and is therefore bound to demand a certain priority on waiting-lists. As against this, it is hoped that there will be a reduction in emergencies resulting from illegal abortions. But hoiv these factors will eventually balance out, nobody really knows.