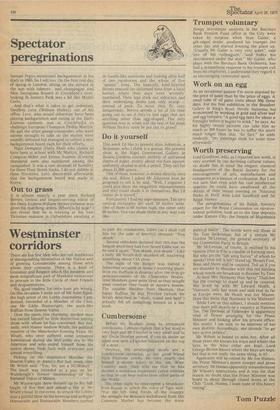 Samuel Pepys mentioned backgammon in his diary in 1665. So I will too. On the first real day of spring in London, sitting on the terrace in the sun with lobsters and champagne and Miss Georgiana Russell at Crockford's overlooking St James's Park was a bit like Monte Carlo.

And that's what it takes to get sedentary Geoffrey Levy (William Hickey) out of his office. Levy, who would otherwise have been playing backgammon and eating in the Daily Express canteen, was at Crockford's to challenge European Champion Phillip Martyn. He and the other gossip-columnists who were unwise enought to take on the master were roundly defeated but managed to collect a new backgammon board each for their efforts.

Nigel Dempster (Daily Mail) who claims to have been at school with Mr Martyn, Richard Compton-Miller and Emma Soames (Evening Standard) were also numbered among the vanquished. It was a rare moment of humility for these Fleet Street hacks. 1 do not dabble in these frivolities. Levy discovered afterwards that the backgammon board was made in Korea.

It is almost exactly a year since Richard Berens, tireless and longest-serving editor of the Daily Express William Hickey column, was given his marching orders. Where is he now? I can reveal that he is relaxing at his vast Victorian mansion in Oxfordshire awaiting a

de Gaulle-like summons and looking after half of two racehorses and the whole of five "spastic" hens. The basically kind-hearted Berens rescued the deformed hens from a local battery where their days were 'severely' numbered. Their legs stick out sideways and their underslung beaks can only scoop — instead of peck. To move they fly very dangerously. Berens spends a lot of his time going out to see if they've laid eggs that are anything other than egg-shaped. The only question now is: when will the rest of his inept William Hickey team be put out to grass?

This week I'd like to present Alan Johnston. a Scotsman, who I think is a genius. His present show. at the Nigel Greenwood Gallery in Sloane Gardens consists entirely of unframed sheets of paper, mostly about ten-foot square, uniformly shaded in with a pencil. They sell for about £1,000 apiece.

One of them, however, is drawn directly onto the wall. When I asked Mr Johnston how he proposed to sell it he said, "Well, I suppose I could give them the megalithic measurements and they could shade it in themselves. But I'd rather do it myself."

Fortunately I had my tape-measure. The two vertical rectangles are each 10 inches wide. One of them is 68 inches high, the other only 60 inches. You can shade them in any way you like.