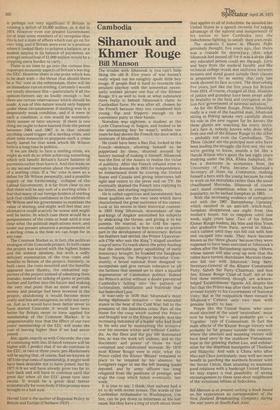 The trouble with Sihanouk is you can't help liking the old B. Five years of war haven't really wiped out his naughty spoilt little boy image. If people find it hard to reconcile the petulant playboy with the somewhat necessarily sombre picture one has of the Khmer Rouge, it's as well to look at what substance there i'eally is behind Sihanouk's claim to Cambodian fame. He was after all, chosen by the French because they too considered him young, flip and frippery enough to be convenient putty in their hands.

Norodom was eighteen, a student at the Lycee Chasseloup in Saigon, and looked to be the unassuming boy he wasn't; within ten years he had shown the French the door with a minimum of bloodshed.

He could have been a Bao Dai, locked in the French embrace, allowing himself to be puppetised by them, shunted around by history instead of making it himself. Sihanouk was the first of the Asians to realise the value of publicity. After the French refused even to reply to his demands in 1953 for independence, he embarrassed them by ,touring the United States and Canada and giving interviews left right and centre to the press and on TV. He eventually shamed the French into replying to his letters, and starting negotiations.

He is called capricious and inconsistent: but these qualities are the very ones which have characterised the great successes of his career. Look at his moves in their historical context: in 1955 King Sihanouk, descendant of the god-kings of Angkor astonished his subjects by abdicating the throne, and giving it to his parents. He wanted, so he told his openmouthed subjects, to be free to take an active part in the development of democracy. Before the feathers had settled, the Prince Upayuvarach ("He who was the King") staged another coup of sorts. To reach above the petty feuding that the inevitable party squabbling of early democracy brought, he founded the Sangkum Reastr Niyum, the People's Socialist Community, a broad national front designed to incorporate and give certain tolerance to all the factions that seemed set to start a squalid degeneration of Cambodian politics. Indeed the Prince's action without a doubt prevented Cambodia's falling into the pattern of factionalism, debilitation and fratricide that has bedevilled Laos.

It wasl.only in 1970 that Sihanouk's most daring diplomatic initiative — the neutralist stance in the heat of the Cold War, fell to the pressures of the Indochina crisis. Part of the blame for the coup which ousted the Prince and brought war to the Khmer people, was the increasing indolence of a leader Who had lived by his wits and by maintaining the initiative over his enemies within and without Cambodia. As the films and the gay life dominated him, so was the work left undone, and so the discontent and power of those he had contained and constrained increase. By 1970 most Khmer Rouge were in exile, what the Prince called the Khmer `Bleues' remained in place to be tempted by his absence, by foreigners eager to see the left leaning leader deposed, and by army officers too long relegated from the positions of prestige, and stage the coup which failed, eventually, last week.

It is true to say, I think, that naiveté had a lot to do with recent events. The words of the Cambodian Ambassador to Washington, Urn Sim, can be put down to bitterness at his lost cause, but they have a ring of truth about them that applies to all of Indochina: he assailed the United States in a speech recently for taking advantage of the naiveté and inexperience of his nation to lure Cambodia into the Indochinese fighting, to satisfy their own ends.

The students I knew in Phnom Penh genuinely thought, five years ago, that theirs was a crusade for democracy, that what Sihanouk had passed off for it was a sham that any educated person could see through. Girls and boys from the medical faculty and the technical college would don uniforms between lectures and stand guard outside their classes in preparation for an enemy that only last week showed its face in town. The intervening five years, just like the five years for Britain from 1914, of course, changed all that. Illusions of justice and grandeur have been swept aside by brutality in the field and corruption in the Lon Nol 'government of national salvation.'

As for the Khmer Rouge, Prince Sihanouk really is a case of the haunted man. Sihanouk sitting in Peking speaks very carefully about his role in the new regime for he knows the three ghosts are watching his every move, Let's face it, nobody knows who does what from one end of the Khmer Rquge to the other — probably not even the Cambodians. The Three Ghosts' are the principal men who have been leading the struggle: the first one, the one we're getting to know, sounds a bit like a Harold Wilson who's spent the last eight years studying under the IRA, Khieu Samphan. He has a doctorate in economics from the University of Paris, became Sihanouk's Secretary of State for Commerce, making himself a hero with the young because he rode to work on his motorbike rather than the usual chauffeured Mercedes. Sihanouk of course can't stand competition when it comes to popularity, so he sacked Samphan in 1963.

With the increasing evidence of corruption

and with the 1967 `Battambang Uprising'•which resulted in an anti-left witch-hunt,

Samphan disappeared one night from this mother's house, not to reappear until last week, eight years later. Two of his fellow Khmer Rouge leaders, Hu Nim and Hou Youn, also graduates from Paris, served in Sihanouk's cabinet until they too fell out with him and escaped into exile. They have become known as the 'three ghosts' because they were supposed to have been executed at Sihanouk's orders after the Battambang uprising. Others, whose names will also crop up now that the tables have turned, doctrinaire Marxists these, also fell out with Sihanouk: Ieng Sary, Secretary-General of the Khmer Communist Party, Saloth Sar Party Chairman, and Son Sen, Khmer Rouge Chief of Staff. All of the first three mentioned, though, are acknowledged 'Establishment' figures. All, despite the fact that the Prince was after their necks, have avowed loyalty to his Government of National Unity. But in the realpolitick there remain in Sihanouk's Cabinet only two men with genuine loyalty to him.

People like the United States, who once stood shocked at the word 'neutralism', must now be hoping for — and probably get — a Yugoslav type of Communism. In fact the main effects of the 'Khmer Rouge victory will probably be far greater outside the country, where the absolute and stunning victory will have bred envy in the stubborn Vietnamese, hope in the gnawing Pathet-Lao, and exhilaration for the dispirited insurgents of Thailand and Malaysia. And with a China who after Mao and Chou particularly, may well see more benefit in patching the northern frontier with the Soviet Union, than straining to maintain good relations with a bankrupt United States, we may expect a real possibility of strong encouragement to these next-door neighbours of the victorious leftists of Indochina.

Bill Manson is at present writing a book based on his experiences as correspondent of the New Zealand Broadcasting Company during the war years in South-East Asia: