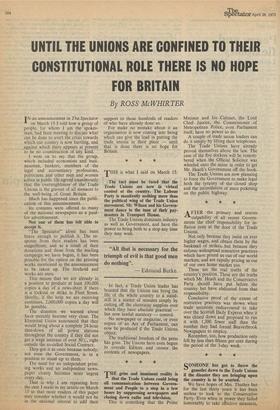 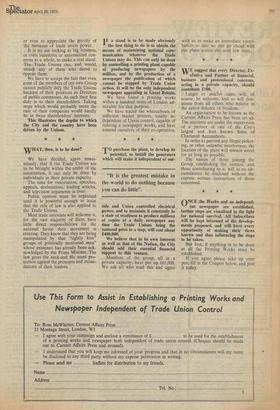 Page 16, 26 April 1975 — UNTIL THE UNIONS ARE CONFINED TO THEIR CONSTITUTIONAL ROLE THERE IS NO HOPE FOR BRITAIN
Close

IN an announcement in The Spectator on March 15 I told how a group of people, for whom I am the spokesman, had been meeting to discuss what can be done to avert the crisi.s towards which our country is now hurtling, and against which there appears at present to be no counteraction of any kind.

I went on to say that the group, which included economists and businessmen, bankers, members of • the legal and accountancy professions, politicians and other men and women active in public life agreed unanimously that the overmightiness of the Trade Unions is the gravest of all menaces to the well-being of Great Britain.

Much has happened since the publication of this announcement.

Its contents were offered to many of the national newspapers as a paidfor advertisement.

Not one of them has felt able to accept it. "The Spectator" alone has been brave enough to publish it. The response from their readers has been magnificent, and as a result of their donations and those from the mailing campaign we have begun, it has been possible for the option on the printing works mentioned in the announcement to be taken up. The freehold and works are ours.

This means that we are already in a position to produce at least 100,000 copies a day of a news-sheet if there is a lockout or strike in Fleet Street. Shortly, if the help we are receiving continues, 2,000,000 copies. a day will be possible.

The disasters we warned about have recently become very close. The Electrical Union announced that they would bring about a complete 24-hour shut-down of all power stations throughout the country if they did not get a wage increase of over 30%, right outside the so-called Social Contract.

They got it at once because nobody, not even the Government, is in a position to stand up to them.

That is why I am repeating here the case I made in my article on March 15 so that more readers of this paper may consider whether it would not be in the national interest to add their support to those hundreds of readers of who have already done so.

For make no mistake about it an organisation is now coming into being which can give the lead in putting the trade unions in their place — until that is done there is no hope for Britain.

THIS is what I said on March 15: The fact must be faced that the Trade Unions are now in virtual control of the country. The Labour Party is manifestly nothing more than the political wing of the Trade Union movement. Mr. Wilson and his Government dance to the tune of their paymasters in Transport House.

The Trade Unions dominate industry as well as Government, and have the power to bring both to a stop any time they may wish.

"All that is necessary for the triumph of evil is that good men do nothing".

In fact, a Trade Union leader has boasted that the Unions can bring the life of the whole country to a standstill in a matter of minutes simply by cutting off the electricity supplies over which they have absolute practical — but now lawful statutory — control.

No newspaper or magazine, or even copies of an Act of Parliament, can now be produced if the Trade Unions object.

The traditional freedom of the press has gone. The Unions have even begun to overule Editors and censor the contents of newspapers.

THE grim and imminent reality is that the Trade Unions could bring all communication between Government and People to a stop in a few hours by suppressing newspapers and closing down radio and television. This is something that the Prime Minister and his Cabinet, the Lord Chief Justice, the Commissioner of Metropolitan Police, even Parliament itself, have no power to do.

A couple of trade union leaders can do it simply by lifting their telephones.

The Trade Unions have already proved themselves above the law. The case of the five dockers will be remembered when the Official Solicitor was wheeled onto the scene in order to get Mr. Heath's Government off the hook.

The Trade Unions are now planning to force the Government to make legal both the tyranny of the closed shop and the intimidation of mass picketing on the public highway.

A FTER the primary and craven 'culpability of all recent Governments the chief responsibility for inflation rests at the door of the Trade Unions.

Not only because they insist on ever higher wages, and obtain them by the backmail of strikes, but because they enforce widespread restrictive practices which have priced us out of our world markets, and are rapidly pricing us out of our own home market too.

These are the real truths of the country's position. These are the truths which Mr. Heath and the Conservative Party should have put before the country but have abdicated from that responsibility.

Conclusive proof of the extent of restrictive practices was shown when trade unionists endeavoured to take over the Scottish Daily Express when it was closed down and proposed to run it with 1,300 fewer staff than the number they had forced Beaverbrook Newspapers to employ.

Recember, too, how production only fell by less than fifteen per cent during the period of the 3-day week.

SOMEONE has got to throw the gauntlet down to the Trade Unions if the disaster they are bringing upon the country is to be averted.

We have hopes of Mrs. Thather but for the last thirty years it has been useless to look to the Conservative Party. Even when in power they failed lamentably to take effective measures, or even to appreciate the gravity of the menance of trade union power.

It is no use looking to big business, or even industries or nationalized concerns as a whole, to make a real stand. The Trade Unions can, and would, smash any of them who dared to oppose them. We have to accept the fact that even some of the members of our own Group cannot publicly defy the Trade Unions because of their positions as Directors of public companies. As such their first duty is to their shareholders. Taking steps which would probably mean the ruin of their companies would hardly be in those shareholders' interests.

This illustrates the depths to which the City and the country have been driven by the Unions.

We have decided, again unanimously, that if the Trade Unions are to be brought within the ambit of the constitution, it can only be done by individuals in their private capacity.

The time for exhortation, speeches, appeals, declarations, leading articles, and television arguments is over. Public opinion must be organised until it is powerful enough to insist that the rule of law is also applied to the Trade Unions.

Most trade unionists will welcome it, for the vast majority of them have little direct responsibilities for the national havoc their movement is creating. They know that they are being manipulated by that "tightly knit" groups of politically motivated men" whose existence has already been acknowledged by the Prime Minister. The law gives the rank-and file scant protection against the pressures and intimidations of their leaders. IF a stand is to be made obviously the first thing to do is to obtain the means of maintaining national communication whatever the Trade Unions may do. This can only be done by controlling a printing plant capable of producing newspapers by the million, and by the production of a newspaper the publication of which cannot be stopped by Trade Union action. It will be the only independent newspaper appealing in Great Britain.

We have found a printing works within a hundred miles of London admirable for this purpose.

We have traced the whereabouts of sufficient master printers, totally independent of Union control, capable of running a newspaper works, and have assured ourselves of their co-operation.

rr0 purchase the plant, to develop its potential, to install the generators which will make it independent of out

"It is the greatest mistake in the world to do nothing because you can do little".

side and Union controlled electrical. power, and to maintain it constantly in a state of readiness to produce millions of copies of a daily newspaper any time the Trade Unions bring the national press to a stop, will cost about £480,000.

We believe that in its own interests as well as that of the Nation, the City should add their essential financial support to this venture.

Members of the group, all in a private capacity, have put up £65,000. We ask all who read this and agree with us to make an immediate contribution so that we can go ahead with our plans within the next few days..

WE suggest that every Director, Ex" etutive and Partner of financial, business and professional concerns, acting in a private capacity, should contribute £100.

Larger or smaller sums will, of course, be welcome, and so will donations from all others who believe in the active defence of freedom.

An organisation to be known as the Current Affairs Press has been set up. The accounts are under the supervision of a partner of one of the City's largest and best known firms of Chartered Accountants.

In order to prevent any illegal picketing, or other unlawful interference, the location of the plant will remain secret for as long as possible.

The names of those joining the Group establishing the venture, and those contributing to it, will in no circumstances be disclosed without the express written instructions of those concerned.

ØNCE the Works and an independ ent newspaper are established, further steps are visualized in the fight for national survival. All Subscribers will be kept informed of the developments proposed, and will have every opportunity of making their views known and thus influencing the steps to be taken.

But first, if anything is to be done at all the Printing Works must be established.

If you agree please take up your pen, fill in the Coupon below, and post it today.