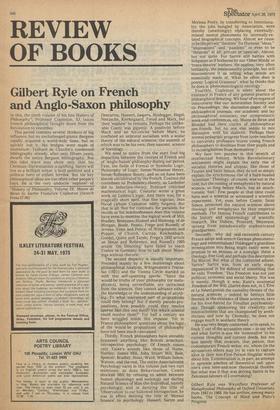 In this, the ninth volume of his fine History of Philosophy*, Professor Copleston, SJ, traces French philosophical thought down from the Revolution to yesterday.

This period contains several thinkers of big influence, but no unchallenged giants. Bergson rapidly acquired a world-wide fame, but as quickly lost it. His bridges were made of aluminium. Teilhard de Chardin's condensed bibliography already, after only fifteen years, dwarfs the entire Bergson bibliography. But this tidal wave may show only that his Christian /Darwinianism is uplifting. Sartre will live as a brilliant writer, a bold publicist and a political hero or enfant terrible. But his key philosophical ideas are too often other people's keys. He is the very undocile 'nephew' of *History of Philosophy, Volume IX: Maine de Biran to Sartre Frederick Copleston (Search Press £7.00) Descartes, Husserl, Jaspers, Heidegger, Hegel, Nietzsche, Kierkegaard, Freud and Marx, but their 'nephew' he remains. Perhaps the unlike able Comte was gigantic. A positivist before. Mach and an hiszoricist before Marx, he conflated an unbrutal socialism with a scalar theory of the natural sciences, the summit. of which was to be his own, then nascent, science of Sociology.

We need to notice from the start four big disparities between the courses of French and of 'Anglo-Saxon' philosophy during our period.

First, the fields of Formal or Symbolic Logic, Philosophy of Logic, Sense/Nonsense theory, Sense/Reference theory, and so on have been almost uncultivated by the French. Cournot did contribute to Probability-theory, as Lachelier did to Induction-theory; Poincare criticised mathematical logic; Couturat wrote a great work on Leibniz's logic. And there was, for a tragically short spell, that fine logician, Jean Nicod (whom Copleston oddly forgets). But that is all. Not for contrasts, for parallels, for recoils or for indebtednesses does this volume have even to mention the logical work of Mill, Bradley, Brentano, Husserl and Meinong; of de Morgan, Boole, Peano, Frege and Russell; of Jevons, Venn and Peirce; of Wittgenstein and Popper; of Church, Carnap, Reichenbach, Goedel, Quine and Tarski. Frege's 1892 article on Sense and Reference, and Russell's 1905 article 'On Denoting' have failed to teach France or Germany how to talk about Meanings without rhetoric.

The second disparity is equally important. Preceded mainly by a few mutterings about

tus (1921) and the Vienna Circle startled us with this self-upsetting aporia: "Since the would-be truths of your philosophy (or meta physics), being unverifiable, are ostracised from the sciences, they cannot advance either the knowledge or the understanding of anyth ing. To what warranted sort of propositions could they belong? But if merely pseudo-pro positions, how possibly could they resolve aporiai like this one itself? Yet which science could resolve them?" For half a century we have wriggled inside this impasse. Yet in France philosophers' questions about the logic of the would-be propositions of philosophy have not been much canvassed.

Thirdly, French philosophers have enviably bypassed anything like British armchair, introspective psychology. Of French voices only Taine's sounds like those of Hume, Hartley, James Mill, John Stuart Mill, Bain, Spencer, Bradley, Stout, Ward, William James, Watson, and the rest. The entire Associationist Psychology earns in this volume just two curt mentions; as does Behaviourism. Comte shocked Mill by refusing to admit between human physiology and sociology our darling Natural Science of Man-the-Individual, namely psychology; and in denying the title of 'Observation' to our hallowed Introspection, he was in effect denYing the title of 'Mental Science' to psychology. Husserl, Sartre and Merleau Ponty, by transferring to Intentionality the jobs bungled by Association, were thereby (unwittingly) replacing externallyrelated mental phenomena by internally-related biographical concepts. Almost we cease to be the private "theatres" for Humean "ideas," "impressions" and "passions" or even to be "theatres" at all, private or open-air. Almost, but not quite. For Sartre still battles with Solipsism as if bothered by our 'Other Minds' or `trans-theatre' bothers. He applies, very often brilliantly, the intentionality-principle, but still misconstrues it as telling what minds are essentially made of. What he often does is potent 'Logical Grammar'; what he thinks that he does is 'phenomenological ontology.'

Fourthly, Copleston is silent about the existence in France of any general practice of philosophical debating. We hear of no organs of controversy like our Aristotelian Society and its Proceedings; the discussion-pages of our philosophical journals; our academic and lay philosophical societies; our symposiastic • week-end conferences, etc. Maine de Biran and Blondel had their circles of philosophical pen-friends, but no one else seems to mix • discussion with his dialectic. Perhaps their normal pedagogic progress from lycee-teachers to university professors inures young French philosophers to docilities from their pupils and to incorrigibilities from themselves.

We face two puzzles in this stretch of intellectual history. While Revolutionary sentiments might explain the early rise of socialist theories and utopias, like those of Fourier and Saint Simon, they do not so simply explain the synchronous rise of a hard-headed 'scientism.' Theology, of course, was out in the cold; but the ousting of metaphysics by natural science, so long before Mach, has an anachronistic 'feel.' Few people at that time could have met a scientist or witnessed a scientific experiment. Yet, even before Comte, Saint Simon promoted the natural sciences above theology and metaphysics for their empirical methods. The famous French contributors to the history and epistemology of scientific research, like Duhem, Poincare, Meyerson, sprang from paradoxically sophisticated grandparents.

Secondly, why did mid-twentieth-century France adopt and stretch German phenomenology and existentialism? Heidegger's grandiose investigation into Being might easily seem to promise to an anxious or a nostalgic theist a theology-free God; and perhaps this description fits Marcel. But what of the contented atheist, Sartre? Sartre was, from an early stage, impassioned in his defence of something that he calls 'Freedom.' This Freedom was not just political, economic and social liberty. Nor was it merely, though it was, Kant's noumenal Freedom of the Will. (Sartre does not, in L'Etre et Le Neant,punish the causality-threats of the natural sciences — indeed he betrays little interest in the existence of these sciences, save for his love-hatred for Freudian psychoanalysis). Though sponsoring the creativity and innovativeness that are championed by aestheticians and now by Chomsky, he does not engage much in aesthetic theory.

He was very deeply concerned, so to speak, to fetch 'I' out of the accusative case — to say who and what Sartre is qua the 'nominative' to his current thoughts and current deeds, but not qua merely that creature, that person, that contemporary French writer, etc, whom (in the accusative) others may try in vain to capture alive in their non-First-Person-Singular words about him. Existentialism is, in part, an attempt to sprinkle pinches of theoretical salt upon one's own here-and-now theoretical thumbs. But what was it that was driving Sartre in his Zenonian labours of I-overtaking?

Gilbert Ryle was Waynflete Professor of Metaphysical Philosophy at Oxford University from 1945 to 1968. He has written, among many books, The Concept of Mind and Plato's Progress