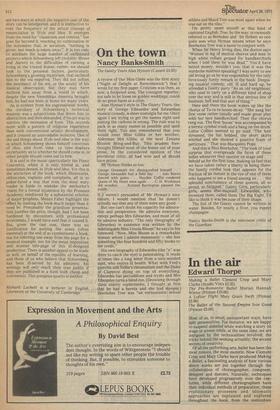 The Gaiety Years Alan Hyman (Cassell £4.95) A review of Our Miss Gibbs was the first story ("Night of Delight at Barnoldswick") that I wrote for my first paper. Criticism was then, as now, a foolproof area. The youngest reporter, not safe to let loose on golden weddings, could do no great harm as a critic.

Alan Hyman's style in The Gaiety Years, the story of George Edwardes and Edwardian musical comedy, is sheer nostalgia for me. Once again I am trying to get the names right and putting the carbons in wrong. The rule was to pack in as many names as possible and spell them right. You also remembered that you would meet Miss Gibbs or her mother, Alderman Mrs Gibbs, at the next Zenana Mission Bring-and-Buy. This prudent forethought filleted most of the bones out of your prose: In the considered opinion of the provincial critic, all had won and all should have prizes.

Mr Hyman thinks so too:

If ,I weren't persuaded of Mr Hyman's nice nature, I would mention that he doesn't actually say that any of them were any good.

But one can't doubt his capacity for admiration and perspiration. He admires everyone, except perhaps Mrs Edwardes, and most of all he admires industry. "The only (biography of Edwardes) in existence was written by the indefatigable Miss Ursula Bloom" he says in his foreword. "Now, Miss Bloom is a remarkable Woman whom I admire immensely — she has something like four hundred and fifty books to her credit."

His own biography of Edwardes (the "e" was there to catch the eye) is painstaking. It reads at times like a long letter from a nice-minded aunt, who enjoys ill health. What with Fred's gastritis and Nellie's rheumatism and the Duke of Clarence dying on top of everything. Edwardes has peccadilloes and trysts and Mrs Edwardes turns a blind eye. (Drowsing through these elderly euphemisms, I thought at first that he had a hernia and she had myopia.) Beerbohm Tree was "an enthusiastic sexual

athlete and Maud Tree was most upset when he was out on the tiles."

I'm pretty upset myself at this kind of castrated English. Tree, by the way, is variously referred to as Berbohm and Sir Hebert so one quite sees what Hyman means when he says Beerbohm Tree was a name to conjure with.

When Sir Henry Irving dies, the doctor says "Women in leg of mutton sleeves and men in high white collars groped for handkerchiefs when I told them he was dead." You'd have betted money, wouldn't you, that it was the wardrobe mistress speaking? I was sorry to see old Irving go as he was responsible for the only ferociously funny remark in the book. Despising musical comedy, old, ill and hard up, he attended a Gaiety party "As an old neighbour, who used to carry on a different kind of shop over the way and is still in that serious line of business: hell and that sort of thing."

Here and there the book wakes up like the chorus of Ta-ra-ra-boom-de-ay. "She sang her first verse rather timidly and made great play with her lace handkerchief. Then the chorus rang out. The first 'boom' was accompanied by a temnc cymbal crash and a bang on the drum. Lottie Collins seemed to go mad. 'The hair streamed, the hat bobbed, the short skirts whirled and she showed a positive foam of petticoats'." That was Macqueen Pope.

And this is Max Beerbohm. "The look of total surprise that overspreads the faces of these ladies whenever they saunter on stage and. . . behold us for the first time, making us feel that we have taken rather a liberty in being there: the' faintly cordial look that appears for the fraction of an instant in the eye of one of them who happens to see a friend among us. . . the splendid nonchalance of these queens, all so proud, so fatigued." Gaiety Girls, particularly girls, seems lese-majest4. Edwardes, who invented them, called them The Big Eight. I'd like to think it was because of their shape.

The fizz of the Gaiety cannot be written in water. Besides, for nearly a fiver, you expect champagne.

Nancy Banks-Smith is the television critic of the Guardian