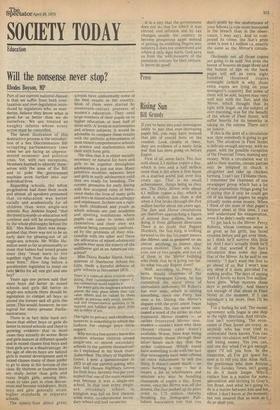 If you've been into your newsagent lately to pay that ever-increasing paper bill, you may have noticed that pile of unsold Suns on the counter. Look closely at them; they are evidence of a nasty little war that has been going on before Easter.

First of all, some facts. The Sun sold about 3.3 million copies a day, which is two and a half million more than it did when it first burst on a startled world just over five years ago. That is no small achievement, things being as they are. The Daily Mirror sells about 4.1 million copies a day, which is about a million less than it did when it first broke through the five million barrier about ten years ago. The Sun and Mirror circulations are therefore approaching a figure of around four million, but are doing it from different directions There is no doubt that Rupert Murdoch, the Sun king, is looking forward to the day his paper passes the Mirror, and is prepared to do almost anything to hasten that joyous moment. There are, however, one or two people, and not all of them in the Mirror building whb think that he is going too far. So what has our Rupert done?

Well, according to Percy Roberts, deputy chairman of the Mirror Newspaper Group, he has committed the worst piece of journalistic dishonesty Mr Roberts has ever seen, which is saying something, since our Percy has seen a lot. During the Mirror's dispute with the print union Sogat over Easter, the Sun never mentioned a word of the strike, so that frustrated Mirror readers — or rather frustrated Mirror nonreaders — couldn't learn why their chosen cheese cake wasn't available. Worse, Suns kept being mysteriously thrust through their letter boxes each day that the strike continued. Which could have something to do with the fact that newsagents have been offered an extra inducement to sell the thing. It doesn't sound much — an extra farthing a copy — but it means a lot to wholesalers and retailers who may be handling thousands of copies a day. Even worse, once the Mirror was off the streets, the Sun pushed up its print order to 3.75 million, thereby breaking the Newspaper Publishers Association rule that you don't profit by the misfortunes of . your fellows (a rule more honoured in the breach than in the observance, I may say). And to cornpound its crime, the Sun's print order is now 4.1 million i.e. exactly the same as the Mirror's circulation.

Obviously not all those copies are going to be sold. Not even the barest of bosoms on page three and the hottest of tips on the back pages will sell an extra eight hundred thousand copies overnight (which is why those extra copies are lying on your newagent's counter). But some of them will be sold, buyers may very ' well stay with the Sun, and the Mirror, which thought that its fight with Sogat, on the subject of over-manning, was for the benefit of the whole of Fleet Street, will suffer heavily for its temerity in taking on the unions. There ain't no justice.

If this is the start of a circulation war, then somebody is going to get hurt. The situation in Fleet Street is delicate enough anyway, with no paper, with the possible exception of the Financial Times, making any money. With a circulation war to add to their worries, certain parties may be tempted to chuck it altogether and take up chicken farming. I can't say I'd blame them. I remember the chairman of one newspaper group which has a lot of non-journalistic things going for it saying that if only he could get rid of his blasted papers he might actually make some money. When 1 think of the state of that paper's balance sheet at that time, I can well understand his exasperation, even if he didn't really mean it.

To get back to the Mirror. Percy Roberts, whose common sense is as great as his girth, has faced troubles before and got over them, so I think he'll survive this little lot. And I don't actually think he'll be all that worried if the Sun's circulation does some day pass that of the Mirror. As he said to me recently: "I don't want the Sun to go ahead of us. But I won't lose any sleep if it does, provided I'm making profits. The days of saying 'Isn't it lovely to have five million' have gone. What matters these days is profitability. And there's not enough of that about in Fleet Street at the moment. If I can introduce a bit more, then I'll be happy."

I've a feeling he will. The recent agreement with Sogat is one step in the right direction. And circulation isn't everything. The economies of Fleet Street are crazy, as anybady who has ever tried to understand them knows. You can increase circulation and find yourself losing money. Yes you can, • and one day when I've got enough space I'll tell you how. In the meantime, all I've got space for now is to tell you that Allan Hall, the gentleman who does Atticus for the Sunday Times, isn't going1. to do it much longer. Who'll replace him is a matter for somespeculation and inviting to Gray's _ Inn Road. And what he's going to , do is a matter between him and his editor. I don't know at the moment but rest assured that as soon as I , do so shall you.