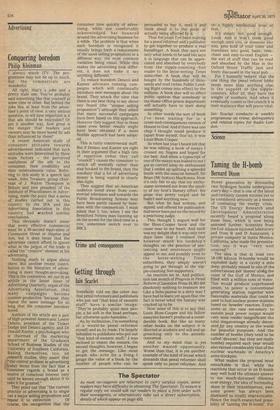 I always watch ITV. The programmes may not be up to much, but the commercials are wonderful.

All right, that's a joke and a pretty stale one. You've probably said something like that yourself at some time or other. But behind the joke lies, at least from the advertiser's point of view, a very serious question, to wit how important is it that ads should be enjoyable? Or put it another way, how great is the danger that readers and viewers may be more bored by ads than influenced by them?

A recent American study of consumer attitudes towards advertisement indicated that such attitudes were determined by three main factors the perceived usefulness of the ads to the consumer, their credibility and their entertainment value. Referring to this study in a speech last week, John Treasure, group chairman of J. Walter Thompson in Britain and new president of the Institute of Practitioners in Advertising, made the point that a series of studies carried out in this country by the IPA and the Advertising Association in this country had peached similar conclusions.

This obviously doesn't mean that every effective commercial must be a 30-second equivalent of CoronaLion Street or Steptoe and Son, but it does mean that the advertiser cannot afford to ignore what in the jargon of the trade is called the "creative" element in his advertising.

Nothing much to argue about there. But another recent contribution to the literature of advertising is more thought-provoking. This is the contention, set out in an article in the latest issue of Advertising Quarterly, organ of the Advertising Association, that many campaigns become counter-productive because they repeat the same message for so long that the consumer becomes bored.

Authors of the article are a pair of high-powered Americans: Lester Delano, president of the Tinker Dodge and Delano agency, and Dr Donald Kanter, a psychologist who is chairman of the marketing department of the Graduate School of Business Studies of the University of Southern California. Basing themselves, too, on research studies, they assert that "the central problem in advertising today stems from the fact that a consumer regards a brand as a source of conscious interest only until he knows enough about it to take it for granted."

They point out that "the current practice in advertising is to single out a major selling proposition and repeat it to extinction . . . Of course, the recognition that the consumer tires quickly of advertising, while not comfortably acknowledged, has bounced around the advertising business for a while, The problem is that when such boredom is recognised it usually brings forth a restatement of the same selling proposition in a different way, the most common variation being visual. While this makes the advertising look different, it does not make it say anything different."

To reduce boredom Delano and Kanter advocate running campaigns which will continually introduce new messages about the brand. They attack the view that there is one best thing to say about any brand (the "unique selling proposition") although they admit that many successful campaigns have been based on this approach. However they suggest that in these cases even better results might have been obtained if a more flexible approach had been adopted.

This is fairly controversial stuff. But if Delano and Kanter are right in their argument that a high rate of repetition (what they call "overkill") causes the consumer to swtich off mentally rather than stay hooked to the brand, then the corollary that a lot of advertising money is being wasted is clearly also right.

They suggest that an American audience trend away from commercial television and towards the Public Broadcasting System may have been partly caused by boredom with the commericals. I must admit that I, too, when I see the Brentford Nylons man looming up on the screen for the third time in a row, sometimes switch over to BBC2.