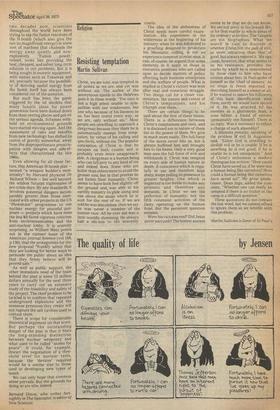 Christ, we are told, was tempted in all points as we are, and yet was without sin. The author of the anonymous epistle to the Hebrews puts it in these words: "For ours is not a high priest unable to sympathise with our weaknesses, but one who because of his likeness to us, has been tested every way, as we are, only without sin." Most people are unwilling to approach a clergyman because they think he is automatically exempt from temptation, by virtue of his calling and ipso facto, without sin. The popular conception of Christ is that he escapes on both counts and is probably even more unapproachL able. A clergyman is a human being who can fall prey to any kind of sin and indeed does. Some who are holier than others seem to avoid the grosser sins, but in that process do not forfeit their humanity. Christ seems to have both feet slightly off the ground and was able in his earthly ministry to glide along and rise above the snags which lie in ,wait for the rest of us. If we are told he was also sinless, then we say he was never a member of the human race. All he ever did was a little worldly slumming. He always had a life-line to the heavenly The idea of the sinlessness of Christ needs more careful examination. His experience in the wilderness at the beginning of his ministry when he was subjected to a gruelling designed to prostitute his Messianic calling, is not an experience common to most men. It can, of course, be argued that some elements in it apply to those in executive positions who are called upon to decide matters of policy affecting both business enterprises and the welfare of people. What is implied in Christ's victory was won after real and conscious struggle. Two things call for a closer examination: the nature and extent of Christ's temptations, and his triumph over them.

There are certain things to be said about the first of these issues. There is a difference between Christ's temptations and ours, and it is disclosed not in nature of them but in the power of them. We give in much more easily. The full force of the storm never hits us, but it always buffeted him and brought him to his knees. Only a very good man sees the full force of evil and withstands it. Christ was tempted on every side of human nature in depth. A conscience which is regularly in use and therefore kept sharp, keeps pulling its possessor to greater heights. One which is neglected is too feeble to make any protests and therefore any demands. In Christ we see the perfection of humanity, not the fifth columnist activities of the Deity operating on the human front. But the persistent question remains.

Were his victories real? Did Jesus never succumb? The honest answer seems to be that we do not know. We are not privy to his inward life, or for that matter to whole areas of his ordinary activities. The Gospels are not biographies. What we search in vain to discover is whether Christ felt the pull of evil, as more attractive than that of good, but always resisted it We can claim, however, that what seems to be his resistance, provides the marks by which he is remembered by those close to him who have written about him. St Paul spoke of himself as the 'chief of sinners.' At no stage is Jesus reported as describing himself as a sinner at all. If he wanted to assure his followers of this basic identification with them, surely we would have record of it. He was attacked 1:13) his enemies as a gluttonous man, a wine bibber, a friend of sinners (presumably one himself). There is no reply. Was it necessary to refute a charge of such absurdity?

A dilemma remains; speaking of the problem of evil St Augustine said, "Either God is unwilling to abolish evil or he is unable. If he is unwilling he is not good; if he is unable he is not omnipotent." And of Christ's sinlessness a modern theologian has written: "Flow could Christ have saved us, if he were not a human being like ourselves? How could a human being like ourselves have saved us?" My great predetessor, Dean Inge, added the comment, "Whether one can really be tempted if there is no traitor in the camp is a difficult question."

These quotations do not contain the last word, but we cannot afford to ignore them as we wrestle with this problem.