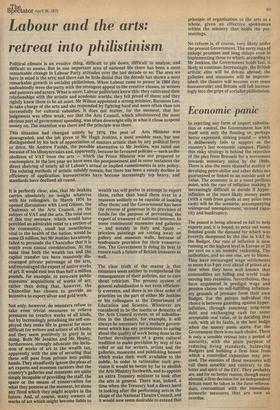 Labour and the arts: retreat into philistinism

Political climate is an evasive thing, difficult to pin down, difficult to analyse, and difficult to assess. But in one important area of national life there has been a most remarkable change in Labour Party attitudes over the last decade or so. The area we have in mind is the arts; and there can be little denial that the decade has shown a most remarkable growth in socialist philistinism. When Labour came to power in 1964 they undoubtedly were the party with the strongest appeal to the creative classes, to writers and painters and actors. What is more, Labour politicians knew this: they cultivated their relationships with the artistic and academic worlds; they felt proud of them; and they rightly knew them to be an asset. Mr Wilson appointed a strong minister, Baroness Lee, to take charge of the arts and she responded by fighting hard and more often than not successfully for cultural subsidies. It does not matter, for the moment, that her judgement was often weak, nor that the Arts Council, which administered the most obvious part of government spending, was often downright silly in what it chose to spend money on. The intention was there and the principle was there.

This situation had changed utterly by 1974. The post of Arts Minister was downgraded, and the job given to Mr Hugh Jenkins, a most amiable man, but one distinguished by his lack of appreciation of matters artistic than by any political force or drive. Mr Andrew FauIds, the possible alternative to Mr Jenkins, was ruled out because of his idiosyncrasies and, apparently, because he favoured policies — such as the abolition of VAT from the arts — which the Prime Minister was not prepared to contemplate. In the last year we have seen the postponement and in some instances the direct shelving of nearly all of Labour's actual or implied commitments in arts policy. The existing methods of artistic subsidy remain, but there has been a steady decline in efficiency of application: bureaucracies have become increasingly top heavy, and standards have declined all round.

It is perfectly clear, alas, that Mr Jenkins carries absolutely no weight whatever with his colleagues. In March 1974 he opened discussions with Lord Gibson, the Chairman of the Arts Council, on the subject of VAT and the arts. The total cost of this tiny measure, which would have provided an admirable relief to a section of the community, small but nonetheless vital to the health of the nation, would be some E5 million, but Mr Jenkins has utterly failed to persuade the Chancellor that it is worth even casual consideration. At the same time both the wealth tax and the capital transfer tax have massively discouraged private patronage of the arts, and encouraged the export of native works of art. It would cost less than half a million pounds, for example, to zero-rate public museums' acquisitions of works of art: rather than doing that, however, the Chancellor has chosen to provide an incentive to export silver and gold work.

Not only, however, do ministers refuse to take even trivial measures to relieve pressures on creative works of all kinds, but by increasingly penalising the self-employed they make life in general far more difficult for writers and artists of all kinds; and they seem positively to glory in so doing. Both Mr Jenkins and Mr Healey, furthermore, strongly advocate the inclusion of works of art in the wealth tax, apparently with the aim of securing that these will pass from private into public hands. They steadfastly ignore the pleas of art experts and museum curators that the country's galleries and museums are quite simply incapable of providing the staff, the space or the means of conservation for what they possess at the moment, let alone any flood which they might acquire in the future. And, of course, many owners of works of art which might become liable to wealth tax will prefer to attempt to export them, rather than hand them over to a museum unlikely to be capable of looking after them; and the Government has been the reverse of generous in its provision of funds for the purpose of preventing the export of treasures of national interest. In some continental museums and galleries — and notably in Italy and Spain — priceless paintings are rotting away on gallery and museum walls, because of inadequate provision for their conservation. The Government is doing its best to ensure such a future of British treasures as well.

The clear truth of the matter is that ministers seem neither to comprehend the consequences of their policies, nor to care about criticism. The present system of general subsidisation is not even efficiently overseen, and there is no clear order of priorities on the part of either Mr Jenkins or his colleagues at the Department of Education and Science. Whatever are considered to be the merits or demerits of the Arts Council system, or of subsidisation in the theatre, for example, it will always be necessary for a modern government which has any pretensions to caring about the quality of work being done in the further development of a great cultural tradition to make provision by way of tax relief or aid for writers, artists and the galleries, museums and publishing houses which make their work available to the public. In order to rationalise such provision it would be better by far to abolish the Arts Ministry forthwith, and to appoint an extra Treasury minister to look after the arts in general. There was, indeed, a time when the Treasury had a direct hand in looking after the performing arts in the shape of the National Theatre Council, and it would now seem desirable to extend that principle of organisation to the arts as a whole, given an effective spokesman within the ministry that holds the pursestrings.

No reform is, of course, very likely under the present Government. The sorry saga of unkept promises and long delays even in implementing those to which, according to Mr Jenkins, the Government holds fast, is likely to continue. Increasingly, the British artistic elite will be driven abroad; the galleries and museums will be impoverished; the theatre will become ever more bureaucratic; and Britain will fall increasingly into the grips of socialist philistinism.