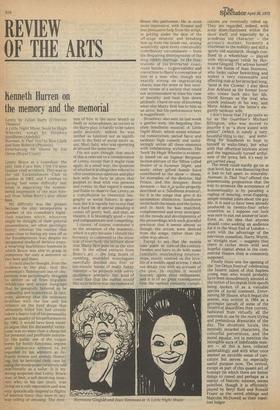 Kenneth Hurren on the memory and the memorial

Lenny by Julian Barry (Criterion Theatre) A Little Night Music, book by Hugh Wheeler, songs by Stephen Sondheim (Adelphi) Norman, Is That You? by Ron Clark and Sam Bobrick (Phoenix) Entertaining Mr Sloane by Joe Orton (Royal Court) Lenny Bruce as a comedian: the only time I saw him, I felt I'd seen funnier road accidents. This was at the old Establishment Club in London in 1962, and I confess to having had some difficulty last week in separating the remembered impression of the man himself from Julian Barry's play about him.

My difficulty was the greater because the play incorporates a number of the comedian's nightclub routines which, whatever might be thought of their general unseemliness, are often piercingly funny; whereas the routine that came close to boring my ears off at the Establishment was, despite its occasional shafts of derisive irony, a wearying inarticulate business in which Bruce was able to grasp at coherence for only a sentence or two here and there.

It could also be thought, from the evidence in the play, that the comedian's flamboyant use of obscenities was picturesqely designed to deliver us all from linguistic inhibitions and sexual hang-ups that he genuinely believed to be unhealthy and hypocritical. In fact, even allowing that his incessant troubles with the law and his reliance on the hard drugs that ultimately killed him had already taken a heavy toil of his personality and the quality of his performances by 1962, it would have been easier to argue that his distasteful vernacular was no more than a cheap bid for personal and profitable notoriety. His public use of the vulgar terms for bodily functions, organs and intimacies seemed to be regarded by his admirers as defiantly honest and sunnily liberating, but he betrayed their case by using the words as perjoratively and non-literally as a sailor. It is my strong suspicion that Lenny Bruce was, at best, a self-deceiving neurotic who, in his last years, was living on a cult reputation and was only sporadically inspired to flights of satirical fancy that were in any way telling or amusing. The men tion of him in the same breath as Swift or Aristophanes, as occurs in the Barry play, is hardly to be taken quite seriously; indeed, he was neither as talented nor as significant in the field of social satire as, say, Mort Sahl, who was operating at around the same time.

I'm not sure, though, that much of this is relevant to a consideration of Lenny, except that it might raise again, in a small way, the question of whether it is altogether ethical to offer tendentious opinions and play hob with the facts in plays that purport to deal with real persons and events. In that regard it seems justifiable to observe that Lenny, as a contribution to theatrical biography or social history, is spurious; but it is equally fair to say that as a hard bit of special pleading it comes off pretty well, and that, as theatre, it is bruisingly good — raw and compassionate and compelling.

I cannot, of course, commend it to the attention of the maidenly, which is a pity because I should like fervently to commend to the attention of everybody the brilliant show that Marty Brill puts on in the title role. In the edited extracts from Bruce's act — the long hours of rambling, mumbled monologues mercifully distilled into fiveor ten-minute bursts of really funny material — he projects with nervy ebullience precisely the kind of comic flair that the author would like us to believe was the essence of Bruce the performer. He is even more impressive, with flimsier and less persuasive help from the script, in getting under the skin of the off-stage neurotic and breaking him up from the inside out, seizing sensitively upon every conceivably contributory circumstance — from the despairing disintegration of the drug-ridden marriage, to the frustrations of the protracted courtroom battles — to give validity and conviction to Barry's conception of him as a man who, though not exactly strong on ingratiating charm, was the more or less innocent victim of a society that could not accommodate in time his view of morality and beat him down pitilessly. I have no way of knowing what else Marty Brill has in him as an actor, but his performance here is magnificent.

Broadway also sent us last week a gentler item, the beguiling Stephen Sondheim musical, A Little Night Music, which mixes whimsical romanticism, period farce and sardonic high comedy and unfalteringly unites all these elements with exhilarating stylishness. The 'book' by Hugh Wheeler is evidently based on an Ingmar Bergman motion-picture of the 'fifties called Smiles of a Summer Night, and many other gifted hands have contributed to the show — those, for examples, of the director, Hal Prince, and the designer, Boris Aronson — but icis quite properly described as a `Sondheim musical', for it is the songs that give it its uncommon distinction. Sondheim wrote both the music and the lyrics, and in both he has matched, complemented and even anticipated the moods and developments of the proceedings with such graceful precision that it seems almost as though the action were derived from the songs, rather than the other way about.

Except to say that the events take place in turn-of-the-century Sweden and have to do with some fancifully interlocking relationships, mostly centred on the lovelife of a middle-aged actress, I shall not detain you with an account of the plot. In outline it would scarcely ignite your enthusiasm, and it is of no great consequence how the various romantic compli cations are eventually tidied up. They are regarded, indeed, with some disenchantment within the show itself, and especially by a wondrous old character — the actress's mother, formerly a courtesan to the nobility and still a sporty old matriarch, though con fined to a wheelchair — played with extravagant relish by Hermione Gingold. The actress herself is in the hands of Jean Simmons, who looks rather bewitching and makes a very reasonable and affecting stab at her principal song, 'Send in the Clowns'. I also liked Joss Ackland as the former lover who comes back into her life, David Kernan as the rival who stands jealously in his way, and Maria Aitken as the latter's elegantly sardonic wife.

I don't know that I'd go quite so far as the Guardian's Michael Billington, who was moved to describe it as "a show kissed with genius" (which is surely a very beautiful thing to say, and some thing for Sondheim to hum to himself in waltz-time), but what with that effortless intricate score and the ingeniously turned artfulness of the lyrics, hell, it's easy to get carried away.

The week could hardly go on at that level, but it was dismaying that it had to fall apart so miserably. Norman, Is That You? offered the impenetrable proposition that the way to promote the acceptance of homosexuality is by parading a ragbag of mincing, wrist-flapping, simple-minded jokes about the gay life. It is said to have been already produced in twenty-four other countries, so I suppose our luck was sure to run out sooner or later. Even so, the idea that anyone should come seeking an audience for it in the West End of London — even with the advantage of the television comedian, Harry Worth, as 'straight man' — suggests that there is rather more wild and hopeful capital about in the commercial theatre than is commonly supposed.

Finally there was the opening of the 'Joe Orton Festival' celebrating the bizarre talent of that hapless young man who would probably have been immoderately amused at the notion of his impish little spoofs being spoken of as a valuable species of social comment. Entertaining Mr Sloane, which began the season, was written in 1964 as a grotesque parody of some of the theatrical absurdities then current, fashioned from virtually all the materials in use by the more trying and pretentious dramatists of the day. The ancertain locale, the mentally retarded characters, the colourful perversions, and the moral squalor, not to mention the intangible aura of indefinable menace — all this is here, collated painstakingly and with what once seemed an enviable sense of caricature but serves no especially useful purpose now. The revival, except as part of this quaint act of homage (in which there are better things to come) and perhaps as a matter of historic interest, seems pointless, though it is efficiently played by Beryl Reid and Ronald Fraser as the weird siblings and Malcolm McDowell as their repellent lodger.