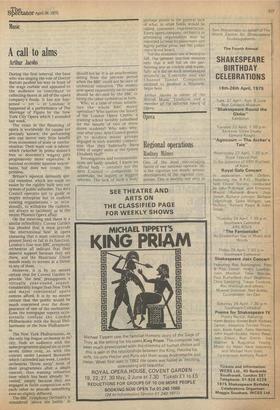 A call to alms

During the first interval, the bass who was singing the role of Doctor Bartolo pushed his way in front of the stage curtain and appealed to the audience to contribute to collecting-boxes in aid of the opera company's funds. It has not happened – yet – in London; it happened at a performance of The Marriage of Figaro by the New York City Opera which I attended last week.

The crisis in the financing of opera is worldwide. Its causes are precisely known: the performing arts can derive very little benefit from economies of scale or mecha nisation. Their main cost is labour, which (whether in prima donna's fees or doormen's wages) gets progressively more expensive. A national economic squeeze exacerbates, but does not create, the problem.

Britain's squeeze demands special remedies, which are made no easier by the rigidity built into our system of public subsidies. The Arts Council operates not to guide or inspire enterprise but to cushion existing organisations – or, occasionally, to withdraw the cushion, not always so tactlessly as in the recent Phoenix Opera affair.

On the receiving end there is a similar inflexibility. Covent Garden has pleaded that it must provide 'the international best' in opera (meaning that it must continue on present lines) or fail in its function.

London's four non-BBC symphony orchestras all indicate that they

deserve support because they are there, and the Musicians' Union stands ready to scream at a threat to any of them.

The New York Philharmonic, as the only big-league orchestra in its city, finds an audience with the same programme played six or even seven times over, as with the concert under Leonard Bernstein which I attended last week. London orchestras 'throw away' most of their programmes after a single concert, thus wasting rehearsal time which has been already 'invested,' simply because they are engaged in futile competition with each other to provide something ever-so-slightly different. The BBC Symphony Orchestra is considered 'above the battle.' It should not be. It is an anachronism dating from the pre-war period when the BBC could not be sure of orchestral resources. The money now spent expensively on its salary should be devoted by the BBC to hiring the other orchestras in turn.

'Who, at a time of crisis, scrutinises the whole BBC music operation? Who queries the luxury of the London Opera Centre, a training school lavishly subsidised for the benefit of two or three dozen students? Who asks why, year after year, Arts Council grants go to modern music groups engaged in such wasteful competition that they habitually leave rows of empty seats at the Queen Elizabeth Hall?

Investigations and recommendations are badly needed. I know no official body – certainly not the Arts Council – competent to undertake the inquiry or suggest reforms. The lack of such a body perhaps points to the general lack of what, in other fields, would be called consumer representation. Every opera company, orchestra or promoting organisation may be expected to issue its passionate and highly partial pleas, but the public voice is not heard.

Yet the economic axe is bound to fall. Our present inaction ensures only that it will fall on the performing arts as crudely and wastefully as it did on such mismanaged projects as Concorde and the Channel Tunnel. Composers inclined to produce a Requiem, begin here.

Arthur Jacobs is editor of the British Music' Yearbook and a member of the editorial board of Opera.