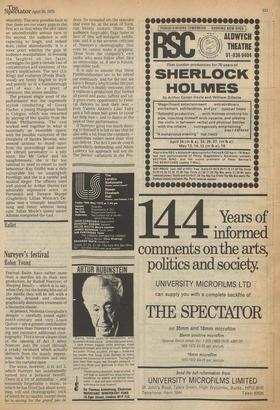 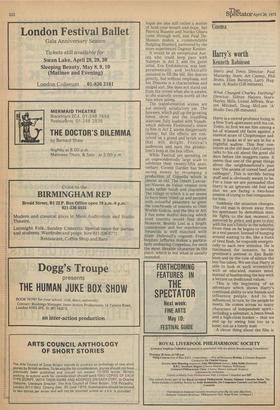 Festival Ballet have rather more than a surefire hit in their new production, by Rudolf Nureyev, of Sleeping Beauty — which is to say, when they cut the boring bits out of the middle they will be left with a superbly dressed and choreographically distinctive treatment of a favourite classic.

At present, Nicholas Georgiadis's designs — carefully toned eighteenth-century and very Louis Quinze — are a greater contribution to success than Nureyev's re-staging and extensive additional choreography. This is never clearer than at the opening of Act 3 when Nureyev puts the court through a creaky saraband which actually detracts from the stately impression made by costumes and sets when the curtains open.

The worst, however, is in Act 2, which Nureyev has unashamedly turned into a personal benefit. There is a lot of unfamiliar — and eminently forgettable — music, to which he has fitted just about every step, trill and choreographic trick of which he is capable, except those he is saving for the grand pas de

loque are also still rather a matter of hold-your-breath-and-hope, but Patricia Ruanne and Noriko Ohara come through well, and Paul DeMasson makes a commendable fledgling Bluebird, partnered by the more experienced Dagmar Kessler.

It would be an exceptional Aurora who could keep pace with Nureyev in Act 3, and the guest artist, Eva Evdokimova, was temperamentally and technically unsuited to fill the bill. She dances prettily, but without emphasis, and her Princess is a characterless and insipid sort. She does not stand out from the crowd when she is awake, so she scarcely seems worth all the fuss when asleep.

The transformation scenes are not entirely satisfactory yet. The hawsers, which pull up the growing forest, show; and the trundling staircase, fully loaded with Naiads, which delivers Florimund's vision to him in Act 2, seems dangerously clumsy; but the effects are conceived on a grand and lavish scale that will delight Festival's audiences and earn the production's keep at the box office.

While Festival are spending on an unprecedentedly large scale to celebrate their twenty-fifth anniveliary, Covent Garden has been saving money by revamping a production of Coppelia which is almost as old. The Osbert Lancaster-Ninette de Valois version now looks rather harsh and charmless. The village in which it is set seems to have been tidied up and peopled with colourful peasantry to greet the coachloads of tourists to Olde Worlde Galicia, and the fete in Act 3 has some dutiful dancing which even tourists would find drab. However, Brenda Last is a bright comedienne and her mischievous Swanilda is well matched with Alain Dubreuil's roguish Franz. Stephen Jefferies makes a particularly endearing Coppelius, for once the most likeable character in the piece, which is not what is usually intended.