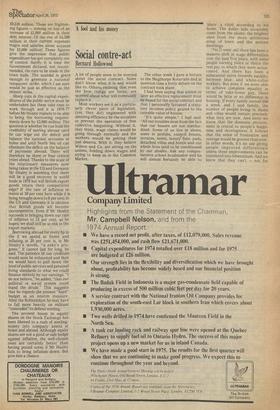 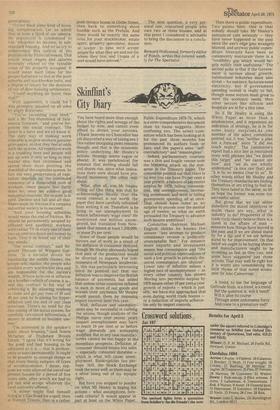 A lot of people seem to be worried about the social contract. Some don't know what it is and would like to. Others, realising that even the best things are finite, are worried about what will eventually replace it.

Most workers see it as a particularly clever piece of legislation, (yes, they do!) engineered with amazing efficiency by the socialists to prevent the operation of free collective bargaining. Without it, they think, wage claims would be going through normally and the workers would be getting their just deserts. With it, they believe Wilson and Co. are sitting on the unions, holding down wages and trying to keep us in the Common Market. The other week I gave a lecture to the Megthorpe Rotarians and at question time a lively debate on the contract took place.

I had been saying that sooner or later an effective replacement must be found for the social contract and that I personally favoured a statutory incomes policy geared to the rateable value of houses.

"It's quite simple," I had said. "All our troubles stem from the fact that our houses are not standardised. Some of us live in slums, some in prefabs, council houses, terraces, semis, luxury' flats, pads, detached villas and hotels and our whole lives tend to be conditioned by our abodes. Ask any comprehensive school headmaster and he will almost t ertainly be able to place' a child according to his home. The duller kids invariably come from the slums: the brighter ones from the more salubrious areas of town and the neatest dwellings.

"No [1 went on] there has been a massive shift in wage differentials over the past five years, with some people earning twice or thrice the real pay to which they were accustomed. And there has been a substantial move towards equality between blueand white-collar workers. But even if we were able to achieve complete equality in terms of take-home pay, there would be little or no difference in housing. If every family earned £80 a week, and I said family, the number of people living in slums and villas would remain precisely what they are now. And since we know that the domestic environment is crucial to people's happiness and development it follows that the sense of frustration and outrage would be greater than ever. In other words, it's no use giving people improved differentials unless these improvements can be translated into lebensraum. And we know that they can't — not for "So we need some kind of housing compensation. Let us admit that at least a third of our admirable population is condemned to Ilve. whatever its income, in substandard housing. And let us try to compensate this section of the population by financial means. This would mean wages and salaries inversely related to the rateable value of the property occupied. It would mean hard times for the people fortunate to live in the posh suburbs and stockbroker belts, and a degree of luxury for the denizens of out-of-date housing settlements.

"Could anything be fairer than that?"

Well, apparently, it could, for I was promptly assailed on all sides by angry Rotarians.

"You're exceeding your brief," said a Mr Ted Hammond of Salamanca Crescent, -and you've forgotten the social contract. The latter is a farce and we all know it. The only way of making work tolerable is to give workers genuine grievances, so that they feel at odds with the system. All repetitive work is a crashing bore and people will put up with it only so long as they realise this, feel victimised and spend their days plotting the downfall of the capitalist system. In fact the very preservation of capitalism depends on the continued existence of a dissatisfied mob of workers. Once people feel fairly done by, once we achieve good industrial relations, the system is in peril. Decline and fall and all that. There must be friction if a complex industrial society is to succeed.

"And your housing subsidies would mean the end of friction. We should be permanently peopled by affluent and apathetic workers with *colour TV in every one of their two up and two down and money to burn. They'd be bored out of their tiny minds."

"The social contract," said Reginald Throom of Wingate Gardens, "is a socialist device for liquidating the middle classes, the 'people who matter, the people who produce every worthwhile idea and are responsible for the nation's wealth. Wilson believes in inflation as a leveller—which of course it is— and the contract is his way of achieving it. By allowing workers to claim and get pay rises of 30 and 40 per cent he is aiming for hyperinflation and the end of our class structure. There's no need for the fine tuning of the social system, for carefully calculated differentials, if money is allowed to become useless."

"I'm interested in the speaker's point about housing," said Norris Mcfarlan of Trubshaw Woods Estate. "I agree that it's wrong for the good and bad housing to be allocated as it is — that is permanently or semi-permanently. It ought to be possible to arrange things so that every family samples all types of accommodation. I mean, suppose we were allowed the use of our present houses for a period of five years only, after which we had to get out and accept whatever the local authority offered.

"A miner might find himself living at 3 Gas Road for a spell, then at Tontine Towers, then in a rather posh terrace house in Glebe Street, then back to something more humble such as the Prefabs. And there would be exactly the same rules for your stockbroker, estate agent, property speculator, doctor or lawyer. In time we'd accept peoplefor what they are and not for where they live, and Utopia of a sort would have arrived." The next question, a very personal one, concerned people who own two or three houses, and at this point I considered it advisable to bring the discussion to a conclusion.

Bernard Hoilowood, formerly editor of Punch, writes this column weekly for The Spectator.