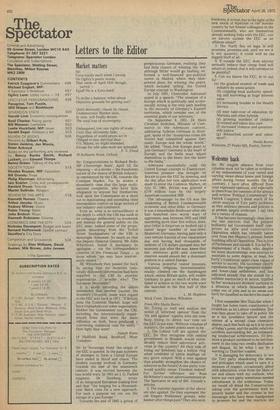 Sir: Trying to read and analyse the welter of 'informed

opinion' from the 'for and against' experts who are now busy trying to direct Our vote on the EEC is not easy. Without volumes of statistics, the salient points seem to be: 1. The Labour Left are against the EEC. Do they recognise that central government in Brussels would considerably reduce their subversive acti vities in this country? All their talk of losing our fr4edoms has a hollow ring when reminded of union dealings on any given subject. Will a vote against thus possibly strengthen the chance of takeover in the future? A one-party vote would quickly ensue. Freedom indeed! For further reference see Ross McWhirter's recent advertisemement in The Spectator or any of Bill Grundy's articles.

2. The extreme opposite of the above are also against. Do they represent the old Empire Preference groups, who hanker after things past? They also seek freedoms, it is true, but in the light of the new mood or rejection or the mother country by her former colleagues in the Commonwealth, who are themselves already seeking links with the EEC, can we survive outside the EEC as an offshore island?

3. The North Sea oil saga is still promises, promises and, until we see it in any quantity, it could well be the biggest bluff of all.

4. If outside the EEC, does anyone seriously believe that cheap food will return or, indeed, that it will continue to be plentiful?

5. Can we blame the EEC, in or out, for: (a) the gradual erosion of trade and industry by union action (b) crippling local authority spending and borroVving at huge interest rates (c) increasing trouble in the Health Service (d) near take-over of education by Marxists and other hybrids (e) growing numbers of children Ill-treated and taken into care (f) increased violence and questionable justice (g) debauchedsoccer and other sport?