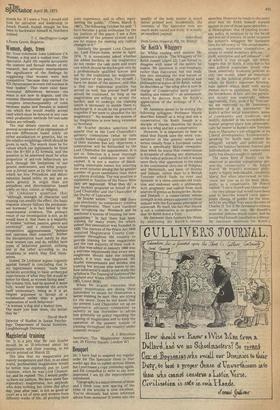 Sir: Your columnist John Linklater ('A Woman, a dog and a walnut tree', The Spectator, April 19) reports accurately the content and factual results of my research, but seriously misrepresents the significance of the findings by suggesting that women were less competitive "because they carried the 30( chromosome in every cell nucleus in their bodies". That there exist basic hormonal differences between the sexes is not now in dispute, and the extreme liberationists' argument for a complete interchangeability of roles between males and females is indeed one which few would readily accept (and which must be delayed in any case until production methods for test-tube babies are refined).

The real debate centres not on a general acceptance of an explanation of sex-role differences based solely on either socialisation or genetics, but on the relative weightings which should be given to each. The search must be for values which can legitimately be fitted into the B= f(H x E) formula, and the question to be answered must be what proportion of sex-role behaviours are such through the limitations of our genetic endowment, and what proportion is forced upon us by the society in which we live. Prejudices and discrimination based solely on sex are no more genetic in origin than are prejudices and discrimination based solely on race, colour, or religion.

Dr Linklater's assertion that "although strength of character and training can modify the effect, the basic response always follows the predominant hormone" is in fact belied by the experimental evidence. The primary result of our investigation is not, as he would have it, that there is a majority of women "normal, passive, gentle and emotional", and a minority whose competitive aggressiveness "defeats and castrates their consorts". Rather the interpretation must surely be that most women can, and do, exhibit both types of behaviour pattern, utilising one or the other according to the situations in which they find themselves.

Indeed, Dr Linklater argues cogently against himself in concluding that in my experiments women "made their decisions according to basic archetypal expectations of what they felt would be better for them, as women facing men". His column title, had he quoted it more fully, would have rendered the article itself unnecessary, being as it is an elegant argument in favour of a socialisation rather than a genetic explanation of such behaviour: "A woman, a dog and a walnut tree, The more you beat them, the better they be."