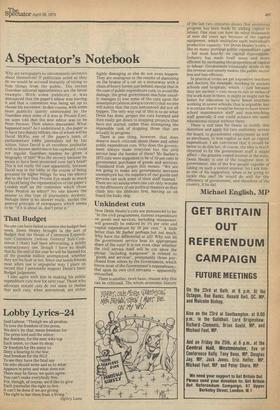 Why are newspapers so uncommonly secretive about themselves? If politicians acted as they do we would be accused instantly of trying to hide things from the public. The recent Guardian editorial appointments are the latest example. With some publicity it was announced that the paper's editor was leaving it and that a committee was being set up to choose his successor. In due course, with some more publicity (partly unintended by the Guardian since some of it was in Private Eye), we were told that the new editor was to be Peter Preston. Then silence descended. What happened next? As I understand it, the paper is to have two deputy editors, one of whom will be David McKie, one of the paper's team of parliamentary lobby journalists led by Ian Aitken. Since David is an excellent journalist with no known skeletons in his cupboard, could not regular Guardian readers be given a biography of him? Was the secrecy because he seems to have been promoted over Ian's head? This is not really the case apparently, because David was in the lobby in the course of being groomed for higher things. So was the silence due to the fact that Private Eye made so much of David being the representative of the paper's London staff on the commitee which chose Peter Preston as editor? No one knows the answer to this type of journalistic mystery. Perhaps there is no answer really, except the general principle of newspapers which seems to be: "if it is about us, don't print it."

No one can have failed to notice the budget last week. Denis Healey brought in the sort of Budget that the House of Commons Expenditure Commitee (whose General Sub-Committee I chair) had been advocating, a mildly contractionary one, though I have no doubt that by the end of the year he will be blamed for all the possible million unemployed, whether they are his fault or not. Since one needs friends most when one is unpopular may 1 place on record that I personally support Denis's basic Budget judgement. I also agree with him in making his public expenditure cuts now for next year. Those who advocate instant cuts do not seem to realise that such cuts, when announced, are either

Said Labour, "Though we all profess, To love the freedom of the press, We don't, by that, mean freedom for The press-lord and the editor, But freedom, for the men who top Each union, to close its shop; Or freedom for the many to Deny a hearing to the few; And freedom for the NUJ To see they have the final say On who should write and as to what Appears in print and what does not.

There may be flaws, we quite agree, You can't make everybody free, For, though, of course, we'd like to give Each journalist the right to live, It can't be done if we are giving . The right to bar them from a living." highly damaging or else do not even happen. They are analogous to the results of slamming on the brakes of a car on a motorway with a chain of heavy lorries just behind, except that in the case of public expenditure cuts, to avoid the damage, the great government machine usually manages to lose some of the cuts upon the assumption (almost always correct) that no one will notice that the cuts announced did not all happen. The only way out of this is to do what Denis has done, project the cuts forw`ard and then really get down to stopping projects that have not started, rather than attempting the impossible task of stopping those that are actually in progress.

There is one thing, however, that does deserve much criticism about these and other public expenditure cuts. Why does the government always make everyone but the civil service bear the burden of them? Mr Barber's 1973 cuts were supposted to be of 10 per cent in government purchases of goods and services. Translated from jargon this means: "We are not going to make any government servants unemployed but the suppliers of our goods and services can sack some of their staff instead." There are occasions when one can only wonder at the effrontery of our political masters as they climb into the lifeboats first, leaving us on board the leaky ship.

Now Denis Healey's cuts are announced to be: "In the civil programmes, current expenditure on goods and services, including manpower, will generally be reduced by Ph per cent and capital expenditure by 10 per cent." A little better than Mr Barber perhaps but not much. Why have the differential at all? Why not let the government service bear its appropriate share of the cuts? It is not even clear whether the civil service itself will be cut since the phrase "including manpower" is related to "goods and services", presumably those purchased from others by the Government, which leaves most of the Government's expend iturethat upon its own civil servants — apparently untouched.

There is another, more basic, reason why this can be criticised. The whole economic history of the last two centuries shows that enormous progress has been made by adding capital to labour. One man can now do what thousands of men did years ago because of the capital equipment, which multiplies each individual's productive capacity. Yet Denis Healey's cuts — like so many previous public expenditure cuts — fall most heavily on capital expenditure. Industry has made itself more and more efficient by increasing the proportion of capital to labour. Government constantly tends to do the reverse and merely makes the public sector less and less efficient.

In practical terms we get expensive teachers and doctors, for example, working in ancient schools and hospitals, which — just because they are ancient — cost more to run in terms of the work done in them. It might or might not be better for education to have fewer teachers working in newer schools, that is arguable, but it is certain that it would be better to have fewer school maintenance staff and non-teaching staff generally if one could achieve the same educational output without them.

There is still time for Denis to rectify this . distortion and apply his cuts uniformly across the board, to government employment as well as purchases, to non-capital as well as capital expenditure. I am convinced that it would be better to do this but, of course, the idea is much objected to by the government staff it might affect — the greatest vested interest in the state. Denis Healey is one of the toughest men in government, one of the few people capable of taking on such a vested interest. So 1 ask him, as one of his supporters, when is he going to tackle this one? He would do well for the efficiency of government, and therefore of the country, if he did.