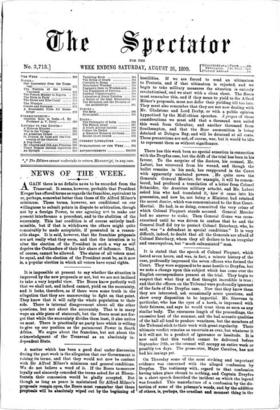 Page 1, 26 August 1899 — There has this week been no special sensation in connection
Close

There has this week been no special sensation in connection

with the Dreyfus case, but the drift of the trial has been in his favour. To the surprise of the doctors, his counsel, Me. Labori, has recovered from his wound, and though the bullet remains in his neck, has reappeared in the Court with apparently unabated powers. He quite cows the Generals. General Mercier, for example, it will be remem- bered, had produced a translation of a letter from Colonel Schneider, the Austrian military attache, and Me. Labori asked him who had translated it, how it came into his possession, and how he, not being a Minister, had retained the secret dossier, which was communicated to the first Court,- Martial. He had, in so doing, committed the very crime of which Colonel Picquart stands accused. General Mercier had no answer to make. Then General Gonse was cross- examined until he was driven to confess that he and the General Staff did try to protect Colonel Esterhazy, who, be said, was " a defendant in special conditidns." It is very difficult, indeed, to doubt that all the Generals are afraid of Colonel Esterhazy, whom they all declare to be an irregular and unscrupulous, but "much calumniated" man.