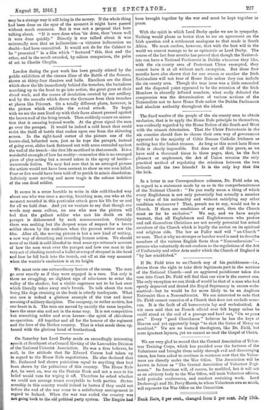 Page 3, 26 August 1916 — London during the past week has been greatly stirred by
Close

London during the past week has been greatly stirred by

the public exhibition of the cinema films of the Battle of the Somme, shown at thirty-four theatres and halls. Excellent are the films which show the life immediately behind the trenches, the battalions marching up to the front to go into action, the great guns at their dread work, and the scenes of desolation created by our artillery and by the assaults which drove the Germans from their trenches at places like Fricourt. On a totally different plane, however, is tho picture which exhibits the actual attack. To begin with we see the men lined up with their faces almost pressed against the brown wall of the firing trench. Then suddenly comes an anima- tion that is amazing beyond words. At the given signal the men go over the parapet. It would be indeed a cold heart that could resist the thrill of battle that rushes upon one from the shivering screen. In the right-hand corner of the picture one of the brown-clad, helmeted men, just as he tops the parapet, instead of going over, slides back flattened out with arms extended against the wall of the trench—the first life sacrificed in that assault. It is a wonderful example of how far reality—remember this is no arranged piece of play-acting but a record taken in the agony of battle- tranecends fiction. We may feel sure that in an arranged picture the artists would not have been content to show us one man killed. Four or five would have been told off to perish in mimic dissolution. Infinitely more moving and more tragic is the solemn isolation of the one dead soldier.