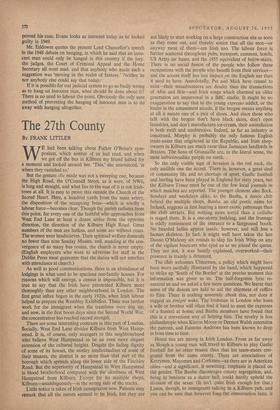 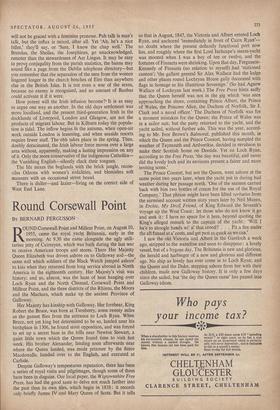 By FRANK LITTLER WE had been talking about Father O'Brien's sym- posium, which neither of us had read, and when we got off the bus in Kilburn my friend halted for a moment and looked around her. 'This,' she announced, 'is where they vanished to.'

But the gesture she made was not a sweeping one, because the High Road, the O'Connell Street, as it were, of NW6, is long and straight, and what lies to the east of it is not Irish- town at all. It is easy to prove this outside the Church of the Sacred Heart. Here, a hundred yards from the main artery, the disposition of the occupying force—which is wholly a labour force—becomes clear. Though the parish radiates from this point, for every one of the faithful who approaches from West End Lane at 'least a dozen arrive from the opposite direction, the direction of the Kilburn High Road. Great numbers of the men are hatless, -and some are without coats. The women wear headscarves. Their spiritual welfare demands no fewer than nine Sunday Masses, and, standing at the con- vergence of as many bus routes, the church is never empty. (English employers who want to advertise for staff in the Dublin Press must guarantee that the duties will not interfere with attendance at church.) As well as good communications, there is an abundance of lodgings in what used to be spacious one-family houses. For reasons which will emerge, a census is impossible, but it is true to say that the Irish have penetrated Kilburn more thoroughly than any other neighbourhood in London. The first great influx began in the early 1920s, when Irish labour helped to prepare the Wembley Exhibition. There was further work for the immigrant when the tramlines were dug up; and now, in the first boom days since the Second World War, the concentration has reached record strength.

There are some interesting contrasts in this part of London. Socially, West End Lane divides Kilburn from West Hamp- stead. It is, of course, only strangers to this neighboUrhood who believe West Hampstead to be an even more elegant extension of the cultured heights. Despite the fading dignity of some of its houses, the motley intellectualism of some of their tenants, the district is no more than that part of the borough which spreads along the lower side of the Finchley Road. But the superiority of Hampstead to West Hampstead is blood brotherhood compared with the aloofness of West Hampstead from Kilburn. Except for its multiple shops, Kilburn—unambiguously—is the wrong side of the tracks.

Little notice is taken of Irish immigration now. Patients may remark that all the nurses seemed to be Irish, but they are not likely to start working on a large construction site as soon as they come out, and thereby notice that all the men—or anyway most of them—are Irish too. The labour force is further scattered throughout pubs, transport, canteens, hotels, US Army air bases, and the 1955 equivalent of below-stairs. There is no social fusion of the people who follow these occupations with the people who benefit from their services— and the accent itself has less impact on the English ear than it used to have. Anecdotally, Pat and Mick have ceased to exist—their misadventures are deader than the transactions of Abie and lkie—and Irish songs which charmed an older generation are impersonal in a BBC studio. It might be no exaggeration to say that to the young espresso addict, or the loafer in the amusement arcade, if the brogue means anything at all it means one of a pair of shoes. And since those who talk with the brogue don't have black skins, don't open laundries, and don't manufacture ice-cream, their assimilation is both swift and unobtrusive. Indeed, as far as industry is concerned, Murphy is probably the only famous English trade-name that originated in the Republic, and Irish shop- owners in Kilburn are much rarer than Jamaican landlords in Brixton. The Sons of Granuaille are, in the literal sense, the most unbusinesslike people on earth.

So the only visible sign of invasion is the red neck, the only audible one the accent. There is, however, a great deal of community life and no shortage of sport. Gaelic football and hurling have been played in England for sixty years, but the Kilburn Times must be one of the few local journals in which matches are reported. The younger element also flock. Sundays and weekdays alike, to the Banba, a dance club behind the multiple shops. Banba, an old poetic mime for Ireland, suggests at first hearing a more exotic patronage than the club attracts. But nothing more torrid than a ceilidhe is staged there. It is a one-storey building, and the frontage is oddly reminiscent of the entrance to a fairground booth. No bearded ladies appear inside, however, and still less a human skeleton. In fact, it might well have taken the late Danno O'Mahony six rounds to slap his Irish Whip on any of the vigilant bouncers who eyed us as we joined the queue. They are not, it .was hastily explained, overworked—their presence is mainly a deterrent.

The club welcomes Ulstermen, a policy which might have been more tactfully illustrated by the band, which happened to strike up 'South of the Border' at the precise moment this information was given to us. The half-forgotten lyric re- assured us and we asked a few more questions. We learnt that some of the dances are held to aid the shipment of coffins to Eire. There is nothing unseemly about this, nor does it suggest an émigré wake. The Irishman in London who loses a wife or brother will often find it hard to meet the expenses of a funeral at home, and Banba members have found that this is a convenient way of helping him.. The revelry is less philanthropic when Kieron Moore or Dermot Walsh entertains the patrons, and Eamonn Andrews has been known to drop in from time to time.

Home ties are strong in Irish London. From as far away as Slough a young man will travel to Kilburn to play Gaelic football for no other reason than that his team-mates emi- grated from the same county. There are associations of Kerrymen, Mayomen and Corkmen—as there are in American cities—and a significant, if unwitting, emphasis is placed on thd gender. The Banba discourages county segregation, and, being in business as a dance hall, could hardly uphold the division of the sexes. (It isn't quite Irish enough for that.) Listen, though, to immigrants talking in a Kilburn pub, and you can be sure that however long, th& conversation lasts. it will not be graced with a feminine pronoun. Pub talk is man's talk, but the influx is mixed, after all. Yet `Ah, he's a nice feller,' they'll say, or 'Sure, I know the chap well.' The Brendas, the Sheilas, the Josephines, go unacknowledged, remoter than the stewardesses of Aer Lingus. It may be easy to prov9 conjugality from the parish statistics, the banns may sound rike a page from the Dublin telephone directory—but you remember that the separation of the men from the women lingered longer in the church benches of Eire than anywhere else in the British Isles. It is not even a war of the sexes, because no enemy is recognised, and no amount of Banbas could activate it if it were.

How potent will the Irish infusion become?. It is as easy to argue one way as another. In the old days settlement was more localised, and the present third-generation Irish in the docklands of Liverpool, London and Glasgow, are not the products of migrant labour. But in Kilburn today the popula- tion is tidal. The inflow begins in the autumn, when open-air work outside London is lessening, and when seaside resorts require fewer staff. The-ebb takes place in the spring. Then, doubly deracinated, the Irish labour force moves over a large area without, apparently, making a lasting impression on any of it. Only the more conservative of the indigenous Catholics— the Vanishing English—silently cluck their tongues.

The life mixes the boglands with the brick jungle, recon- ciles Odeons with women's sodalities, and blemishes soft manners with an occasional street brawl.

There is duller—and lazier—living on the correct side of West End Lane.