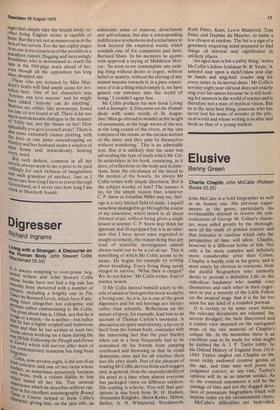 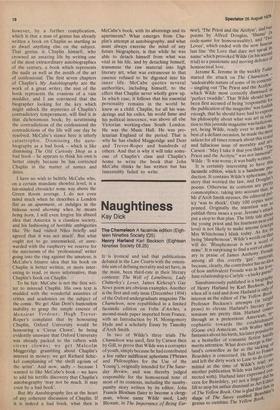 John McCabe is a bold biographer as well as an honest one. His previous experiments in the genre, particularly his workmanlike attempt to resolve the contradictions of George M. Cohan's character, were aided greatly by the thoroughness of his study of printed sources and that resource to candour which only the perspective of lime will allow. Chaplin, however is a different kettle of fish. Not only a far more complex and infinitely more considerable artist than Cohan, Chaplin is hardly cold in his grave, and it must surely be obvious to everyone, from the dutiful biographers who earnestly desire to provide a definitive Life, to the ridiculous hucksters who tumble over themselves and each other in their eagerness to put a travesty of the Little Fellow on the musical stage that it is far far too soon for any kind of a rounded portrait. It is certain to be some years before the relevant documents are released, the secrets divulged, the facts discovered and a cosmic view imposed on the variegated mass of the raw material of Chaplin's unique life. In the meantime there is an excellent case to be made for what might be dubbed the A. J. P. Taylor lobby. In his Oxford History of England from 19141945 Taylor singled out Chaplin as the most richly endowed creative genius of the age, and time may well prove his judgment correct; at any rate, Taylor's opinion will do as an interim verdict. As to the eventual assessment it will be the passage of time and not the dogged devotion of premature biographers which will Impose order on the circumstantial chaos.

however, by a further complication, which is that a man of genius has already written a book on Chaplin so startling as to dwarf anything else on the subject. That genius is Chaplin himself, who crowned an amazing life by writing one of the most extraordinary autobiographies of the century, a book which represents the nadir as well as the zenith of the art of confessional. The first seven chapters of Chaplin's My Autobiography are the work of a great writer; the rest of the book represents the evasions of a vain muddler, and I am convinced that the biographer looking for the key which might unlock the mysteries of Chaplin's contradictory temperament, will find it in that dichotomous book; by scrutinising the contradictions of the confessional the contradictions of the life will one day be resolved. McCabe's stance here is utterly catastrophic. Dismissing the autobiography as a bad book — which is like dismissing The Old Curiosity Shop as a bad book — he appears to think his own is better simply because he has corrected Chaplin in the matter of names and dates.

I have no wish to belittle McCabe who, on a certain mundane showbiz level, is a fair-minded chronicler some way above the Green Room average. I do not even mind much when he describes a London flat as an apartment, or indulges in the hideous word aboming when he means being born. I will even forgive his absurd idea that America is a classless society, and his fashioning of horrible ambiguities like 'He had visited Niles briefly and agreed that it was not much'. But what ought not to go unremarked, or unrewarded with the raspberry we reserve for the narcissism of the 'professional' writer going into the ring against the amateur, is McCabe's bizarre idea that his book on Chaplin is better written, or more interesting to read, or more informative, than Chaplin's book on Chaplin.

To be fair, McCabe is not the first writer to misread Chaplin. His own text is studded with the wonderful assinities of critics and academics on the subject of the comic. We get Alan Dent's humourless inability to grasp the simple essence of Monsieur Verdoux; Hugh TrevorRoper's complaint that by honouring Chaplin, Oxford University would be honouring a 'Circus Clown', he being evidently unaware that Oxford University was already packed to the rafters with circus clowns; we get Malcolm Muggeridge grumbling about Chaplin's interest in money; we get Richard Schickel complaining of 'the shrill egoism of the artist'. And now, sadly — because I wanted to like McCabe's book — we have to add his terrific discovery that Chaplin's autobiography 'may not be much. It may even be a bad book'.

But My Autobiography lies at the heart of any coherent discussion of Chaplin. If it is indeed a bad book, what then is McCabe's book, with its abornings and its apartments? What emerges from Chaplin's attempt at autobiography, and what must always exercise the mind of any future biographers, is that while he was able to detach himself from what was vital in his life, and by detaching himself, transmute the raw material into high literary art, what was extraneous to that essence refused to be digested into his inner life. McCabe quotes several authorities, including himself, to the effect that Chaplin never wholly grew up. In which case, it follows that his essential personality remains in the world he knew as a child. Chaplin, for all his wanderings and his exiles, his world fame and his political innocence, was above all else Victorian working-class South London. He was the Music Hall. He was proletarian England of the period. That is why he has eluded Mug,geridge and Dent and Trevor-Roper and hundreds of others. And that is why it will take someone of Chaplin's class and Chaplin's home to write the book that John McCabe thinks he has written but has lamentably failed to write.