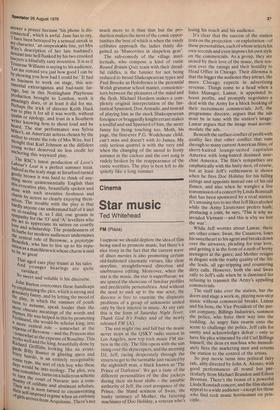 FM (Plaza) I suppose we should deplore the idea of film being used to promote music, but there's a nice irony in the fact that the current wave of disco movies is also promoting certain old-fashioned cinematic virtues, like clear storyline, straightforward direction and unobtrusive editing. Moreover, when the star is the music, the star is superfluous: we are spared the showcase of familiar profiles and predictable personalities. And without the need to suck up to the star actor, the director is free to examine the disparate problems of a group of unknowns united only by their interest in music. At any rate this is the form of Saturday Night Fever, Thank God It's Friday and of the newly released FM (A).

The sun might rise and fall but the music never stops at the QSKY radio station in Los Angeles, now top rock music FM station in the city. The film opens with the sun rising over the skyscrapers, and the morning DJ, Jeff, racing desperately through the streets to get to the turntable just vacated by the nightshift man, a black known as 'The Prince of Darkness'. We get a taste of the different personalities of the disc jockeys during their six-hour shifts — the amiable authority of Jeff, the cool arrogance of the Prince, the bland sexiness of Swan, the husky intimacy of Mother, the faltering machismo of Doc Holiday, a veteran who's losing his touch and his audience.

It's clear that the success of the station rests on the projection —or exploitation —of these personalities, each of whom selects his own records and even imposes his own style on the commercials. As a group, they are united by their love of the music, their tension over the ratings and their hostility to Head Office in Chicago. Their dilemma is that the bigger the audience they attract, the more Chicago expects in advertising revenue. Things come to a head when a Sales Manager, Lamar, is appointed to boost profits, and promptly negotiates a deal with the Army for a block booking of their recruitment commercials. Jeff, the programme director, argues that the ads must be in tune with the station's image: Lamar argues that the image must accommodate the ads.

Beneath the surface conflict of profit with quality lies that other conflict that runs through so many current American films, of short-haired lounge-suited capitalist America with long-haired denimed anarchist America. The film's sympathies are emphatically with the hairy men, of course, but at least Jeff's ruthlessness is shown when he fires Doc Holiday for his falling ratings and appoints instead one of his old flames, and also when he wangles a live transmission of a concert by Linda Ronstadt that has been sponsored by a rival station. It's amusing too to see that Jeff likes alcohol while the Army Lieutenant prefers hash; producing a joint, he says, 'This is why we invaded Vietnam — and this is why we lost the war'.

The staff take over the station, bar the doors and stage a work-in, playing non-stop music without commercial breaks. Lamar and his boss, the Vice President of the parent company, Billings Industries, summon the police, who force their way into the building. As angry fans swarm onto the scene to challenge the police, Jeff calls for sanity and acknowledges defeat — only to have his plea witnessed by old Carl Billings himself, the deus ex machina who immediately fires the marketing men and returns the station to the control of the artists.

So pop movie turns into political fairy tale, ably directed by John A. Alonzo, with good performances all round but par ticularly from Michael Brandon and Eileen Brennan. There's the bonus of a powerful Linda Ronstadt concert, and the film should appeal to a wide audience —except for those who find rock music horrisonant on principle.