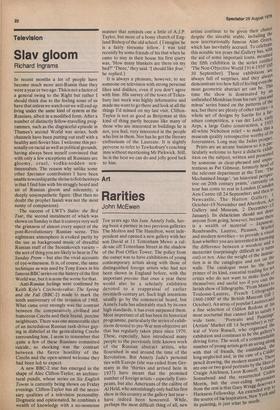 In recent months a lot of people have become much more anti-Russia than they were a year or two ago. This is not a factor of a general swing to the Right but rather I should think due to the feeling some of us have that unless we watch out we will end up living under the same kind of system as the Russians, albeit in a modified form. After a number of distinctly fellow-travelling programmes, such as the disgraceful episode in Thames's second World war series, both channels have been putting out stuff with a healthy anti-Soviet bias. I welcome this personally on racial as well as political grounds, having always been myself convinced that with only a few exceptions all Russians are gloomy, cruel, vodka-sodden sentimentalists. The reason why unlike some other Spectator contributors I have been unable toworship at the shrine to Solzhen itsyn is that I find him with his straggly beard and air of Russian gloom and solemnity, a deeply unsympathetic figure. (But then no doubt the prophet Isaiah was not the most sunny of companions).

The success of LWT's Stalin: the Red Tsar, the second instalment of which was shown on Sunday is that it conveys very well the grimness of almost every aspect of the post-Revolutionary Russian scene. This nightmare atmosphere is evoked partly by the use as background music of dreadful Russian stuff of the Stostakovich variety the sort of thing you are likely to hear in The Sunday Prom but also the vivid accounts of eye-witnessess. It is, of course, the same technique as was used by Tony Essex in his famous BBC series on the history of the first World war, but it is none the worse for that.

Anti-Russian feelings were confirmed by Keith Kyle's Czechoslovakia: The Spring and the Fall (BBC-2) made to mark the tenth anniversary of the invasion of 1968. What came over strongly was the contrast between the comparatively civilised and humorous Czechs and their brutal, porcine neighbours. There was one memorable shot of an incredulous Russian tank-driver gaping in disbelief at the gesticulating Czechs surrounding him. I seem to remember that quite a few of these Russians committed suicide, so shocking was the contrast between the fierce hostility of the Czechs and the open-armed welcome they had been led to expect.

A new BBC-2 star has emerged in the shape of Alec Clifton-Taylor, an architectural pundit, whose series on Six English Towns is currently being shown on Friday evenings. Clifton-Taylor has all the necessary qualities of a television personality. Dogmatic and opinionated, he combines a wealth of knowledge with a no-nonsense manner that reminds one a little of A.J.P. Taylor, but more of a bossy church of England Bishop of the old school. ( I imagine he is a fairly tiresome fellow. I was told recently by some friends of his that when he came to stay in their house his first query was, 'How many blankets are there on my bed?' Three,' they said. 'I should like four,' he replied.) It is always a pleasure, however, to see someone on television with strong personal likes and dislikes, even if you don't agree with him. His survey of the town of Tekesbury last week was highly informative and made me want to go there and look at all the things I'd missed on my last visit. CliftonTaylor is not as good as Betjeman at this kind of thing partly because like many of those who are interested in buildings he is not, you feel, very interested in the people who live in them. Nor has he got the literary enthusiasm of the Laureate. It is slightly perverse to refer to Tewkesbury's coaching inns without mentioning Mr Pickwick. Still, he is the best we can do and jolly good luck to him.