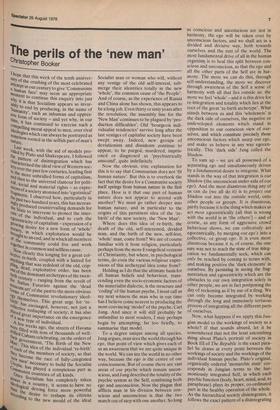 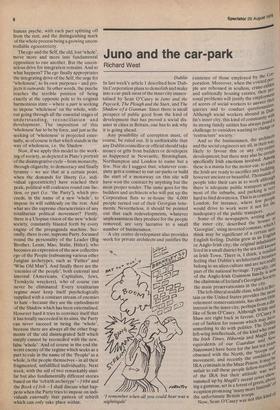 The perils of the 'new man'

Christopher Booker hope that this week of the tenth anniversary of the crushing of the most celebrated attempt in our century to give 'Communism a human face' may seem an appropriate moment to continue this enquiry into just Why it is that Socialism appears so invar',ably to end by producing, in the name of '11,antanity', such an inhuman and oppress!ve form of society — and yet why, in our time it has continued to exercise such a etlaVelling moral appeal to men, over rival ideologies which can always be portrayed as

somehow rooted in the selfish part of man's nature.

. Last week, with the aid of models provided by Plato and Shakespeare, I followed

9the pattern of disintegration which has 1aracterised the ideal view of Western socletY over the past few centuries, leading first 15, the more unbridled forms of capitalism, and then to the universal clamour for political, social and material rights — as expresfrsic3ris of a society atomised into 'egotistical' thaginents. I observed how, particularly in Past two hundred years, this has increasaglY Produced countervailing demands for State to intervene to protect the interests of the individual, and to curb the g°centricity of capitalism —expression of a ing desire for a new form of 'whole' breletY, in which exploitation would be ofciught to an end, and in which all members , the community could live and work gether in common and selfless cause. NPw clearly this longing for a great colanetive re-birth, coupled with a hatred for penthing that was redolent of the old, crip,„ g, dead, exploitative order, has been tTle of the dominant archetypes of the twentie th century — ranging from the revolt of Italian Futurists against the 'dead fo'setan art' of the past to the more obvious 0,,rnIs of Communist revolutionary ideolQt,hemselves. This great urge for 're ce-i l,," has envisaged, however, not just a

Naective reshaping of society:, it has also

of aced great importance on the emergence new type of individual. we'few weeks ago, the streets of Havana deed with tens of thousands of wellCubans celebrating, on the orders of government, 'The Birth of the New efatfThis idea of the individual 're-birth' th each of the members of society, so that ,iietY become the race of fully-integrated nten necessary to build the Socialist e„°Pia, has played a conspicious part in "rTrnunist countries of all kinds. pouwnce Socialism has completely taken ide 71. in a country, it seems to have no gical driving force more powerful aer the desire to reshape its citizens °I-ding to the new mould of the ideal

Socialist man or woman who will, without any vestige of the old self-interest, submerge their identities totally in the new 'whole', the common cause of 'the People'. And of course, as the experience of Russia and China alone has shown, this appears to be a long job. Even thirty or sixty years after the revolution, the assembly line for the 'New Man' continues to be plagued by 'production difficulties'. Old 'bourgeois individualist tendencies' survive long after the last vestiges of capitalist society have been swept away. Indeed, new groups of deviationists and dissidents continue to appear, to be purged, murdered, imprisoned or diagnosed as 'psychiatrically unsound', quite indefinitely.

Now the obvious, trite explanation for this is to say that Communism does not 'fit human nature'. But this is to overlook the fact that the desire for a Communist society itself springs from human nature in the first place. How is it that one part of human nature does not appear to accord with another? We must go rather deeper into human nature, and in particular to the origins of this persistent idea of the 'rebirth' of the new society, the 'New Man'.

Where does this idea of re-birth, the death of the old, self-interested, divided man, and the birth of the new, self-less, 'whole' man, come from? We are of course familiar with it from religion, particularly perhaps from the more Evangelical versions of Christianity, but where, in psychological terms, do even the various religious expressions of this archetypal idea come from?

Holding as I do that the ultimate basis for all human beliefs and behaviour, transcending even the socio-economic factors of the materialist dialectic, is the structure and 'coding' of the human psyche, I must call as my next witness the man who in our time has I believe come nearest to producing the most convincing 'model' of the psyche, Carl Jung. And since it will still probably be unfamiliar to most readers, I may perhaps begin by attempting, far too briefly, to summarise that model.

To a degree unique among all species,

Jung argues, man sees the world through his ego, that point of view which gives each of

us an awareness that we are quite unique in

the world. We can see the world in no other way, because the ego is the centre of our

consciousness. But of course there are vast areas of our psyche which remain unconscious, and Jung described the totality of the psychic system as the Self, combining both

ego and unconscious. Now the plague that afflicts man in his division between con

scious and unconscious is that the two march out of step with one another. So long

as conscious and unconscious are not in harmony, the ego will be taken over by unconscious factors, and we shall act in a divided and divisive way, both towards ourselves and the rest of the world. The most fundamental drive of all in the human organism is to heal this split between conscious and unconscious, so that the ego and all the other parts of the Self are in harmony. The more we can do this, through self-understanding, the more we discover through awareness of the Self a sense of harmony with all that lies outside us: the more we feel 'whole' — and it is this drive for re-integration and totality which lies at the root of the great 're-birth archetype'. What stands between us and this 'wholeness' is the dark side of ourselves, the negative or undeveloped elements which stand in opposition to our conscious view of ourselves, and which constitute precisely those unconscious factors which usurp our ego, and make us behave in any way egocentrically. This 'dark side' Jung called the Shadow.

To sum up — we are all possessed of a separating ego and simultaneously driven by a fundamental desire to integrate. What stands in the way of that integration is our Shadow (the unconscious under-side of our ego). And the most disastrous thing any of us can do (we all do it) is to project our Shadow out into the outside world, onto other people or groups. It is disastrous, partly because it is the thing which makes us act most egocentrically (all that is wrong with the world is in 'the others') — and of course, as any form of aggressive crowd behaviour shows, we can collectively act egocentrically, by merging our ego's into a collective, or group ego. It is even more disastrous because it is, of course, the one sure way not to reach the state of true integration we fundamentally seek, which can only be reached by coming to terms with,

and making positive the 'dark elements' in ourselves. By persisting in seeing the frag mentation and egocentricity which are the obstacles to our own integration solely in other people, we are in fact postponing the day of reckoning as if by use of a drug. We can only become integrated by working through the long and immensely tortuous process of integrating all the different parts of ourselves.

Now, what happens if we apply this Jungian model to the workings of society as a whole? If that sounds absurd, let it be remembered that not the least astonishing thing about Plato's portrait of society in

Book III of The Republic is the exact para

llel tie draws at every point between the workings of society and the workings of the individual human psyche. Plato's original, organically ordered 'monarchic state' corresponds in Jungian terms to the har moniously integrated Self, in which each psychic function (body, heart, mind, soul, to paraphrase) plays its proper, co-ordinated part in the healthy operation of the whole. As the hierarchical society disintegrates, it follows the exact pattern of a disintegrating human psyche, with each part splitting off from the rest, and the distinguishing mark of the whole process being a growing uncontrollable egocentricity.

The ego and the Self, the old, lost 'whole', move more and more into fundamental opposition to one another. But the unconscious drive for integration remains. And so what happens? The ego finally appropriates the integrating drive of the Self, the urge for 'wholeness', to its own purposes and projects it outwards. In other words, the psyche reaches the terrible position of being exactly at the opposite pole to its original harmonious state where a part is seeking to impose 'wholeness' on the whole, without going through all the essential stages of understanding, reconciliation and development. The imposition of this 'wholeness' has to be by force, and just as the seeking of 'wholeness' is projected externally, so of course is that which stands in the way of wholeness, i.e. the Shadow.

Now, if we apply this model to the working of society, as depicted in Plato's portrait of the disintegrative cycle -from monarchy, through oligarchy, to democracy and finally tyranny we see that at a certain point, when the demands for liberty (i.e. individual egocentricity) have reached their peak, political will coalesces round one faction, or part (i.e. 'the Party'), which proceeds, in the name of a new 'whole', to impose its will ruthlessly on the rest. And what are the supreme characteristics of any totalitarian political movement? Firstly, there is a Utopian vision of the new 'whole' society, constantly blasted forth by every engin,e of the propaganda machine. Secondly, there is one, supreme Party, focussed round the personality of the Leader (Big Brother, Lenin, Mao, Stalin, Hitler), who becomes an expression of the new collective ego of the People (subsuming various other Jungian archetypes, such as 'Father' and 'Wise Old Man'). And finally there are the 'enemies of the people', both external and internal (Americans, Capitalists, Jews, Trotskyite wreckers), who of course can never be eliminated. Every totalitarian regime must keep itself psychologically supplied with a constant stream of enemies to hate because they are the embodiment of the Shadow which has been externalised.

However hard it tries to convince itself that it has totally succeeded in its aims, the Party can never succeed in being the 'whole', because there are always all the other fragments of the old disintegrated Self which simply cannot be reconciled with the new, false 'whole'. And of course in the end the worst enemy of the regime which seeks as a part to rule in the name of the 'People' as a whole, is the people themselves in all their fragmented, unfulfilled individuality. Next week, with the aid of two remarkably simi lar but also fundamentally different stories based on the 'rebirth archetype' -1984 and the Book of Job I shall discuss what happens when the Party tries to impose on individuals externally that pattern of rebirth which can only take place within.