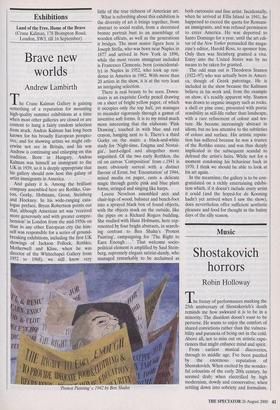 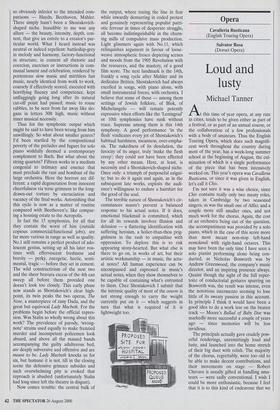 The frenzy of performances marking the 25th anniversary of Shostakovich's death reminds me how awkward it is to be in a minority. The dissident doesn't want to be perverse. He wants to enjoy the comfort of shared convictions rather than the vulnera- bility and paranoia of being out in the cold. Above all, not to miss out on artistic expe- riences that might enhance mind and spirit.

From earliest musical discoveries, through to middle age, I've been puzzled by the enormous reputation of Shostakovich. When excited by the wonder- ful colourists of the early 20th century, he seemed drab; when electrified by high modernism, dowdy and conservative; when settling down into sobriety and formalism, so obviously inferior to the intended com- parisons — Haydn, Beethoven, Mahler. There simply hasn't been a Shostakovich- shaped niche. Inaudible to me was any allure — the beauty, intensity, depth, con- tent, that give an entrée to a creator's par- ticular world. What I heard instead was neutral or indeed repellent: battleship-grey in melody and harmony, factory-functional in structure; in content all rhetoric and coercion, exercises or instructions in com- munal lament and celebration, rendered by portentous slow music and mirthless fast music, nearly identical from work to work, coarsely if effectively scored, executed with horrifying fluency and competence, kept unflaggingly going long after its natural cut-off point had passed; music to rouse rabbles, to be seen from far away like slo- gans in letters 30ft high, music without inner musical necessity. Thus for the symphonic output which might be said to have been wrung from him unwillingly. So what about smaller genres? I'd been startled by the compositional poverty of the preludes and fugues for solo piano wishfully deemed a contemporary complement to Bach. But what about the string quartets? Fifteen works in a medium congenial to intimacy and essence that must preclude the rant and bombast of the large orchestra. Here the horrors are dif- ferent; a rapid degeneration from innocent cheerfulness via terse grimness to the long- drawn-out torture by excruciation and vacancy of the final works. Astonishing that this cycle is now as a matter of routine compared with Beethoven's; like compar- ing a housing estate to the Acropolis. In fact the 15 symphonies, for all that they contain the worst of him (outside copious commercial/functional jobs), are far more various in range as well as quality. No.1 still remains a perfect product of ado- lescent genius, setting up all his later rou- tines with effervescent freshness and brevity — perky, energetic, hectic, senti- mental, tragic — before they set in cement. The wild constructivism of the next two and the sheer bravura excess of the 4th can sweep all before them provided one doesn't look too closely. This early phase now stands as Shostakovich's clear high- point, its twin peaks the two operas, The Nose, a masterpiece of zany Dada, and the great but equivocal Lady Macbeth. For the problems begin before the official repres- sion. Was Stalin so wholly wrong about this work? The prevalence of parody, 'wrong- note' strains used equally to make frenzied murder and incompetent policemen look absurd, and above all the massed bands accompanying the guilty adulterous bed, are deeply subversive and offensive and are meant to be. Lady Macbeth knocks us for six, but humane it is not, till in the closing scene the defensive grimace subsides and such overwhelming pity is evoked that reproach is abashed (unfortunately Stalin had long since left the theatre in disgust). Now comes trouble: the central bulk of the output, where toeing the line in fear while inwardly demurring in coded protest and genuinely representing populist patri- otic fervour in times of desperate struggle, all become indistinguishable in the churn- ing mills of compulsive mass production. Light glimmers again with No.11, which relinquishes argument in favour of loose- weave atmospheric fresco depicting scenes and moods from the 1905 Revolution with the resources, and the mastery, of a good film score. The next landmark is the 14th, frankly a song cycle after Mahler and its dedicatee Britten. Shostakovich had always excelled in songs, with piano alone, with small instrumental forces, with orchestra. I believe that some of these — among them settings of Jewish folklore, of Blok, of Michelangelo — will remain potently expressive when efforts like the 'Leningrad' or 10th symphonies have sunk without trace. Supreme among them is this 14th symphony. A good performance 'in the flesh' vindicates every jot of Shostakovich's habitual harshness, meanness, over-empha- sis. The nakedness of its desolation, the ferocity of its anger, truly 'make the flesh creep'; they could not have been effected by any other means. Here, at least, is necessity and a Shostakovich-shaped niche. Once only: a triumph of purposeful exigui- ty; but to do it again and again, as in the subsequent late works, exploits the audi- ence's willingness to endure a hairshirt for the good of the soul. The terrible nature of Shostakovich's cir- cumstances mustn't prevent a balanced response to his actual notes. If it does, emotional blackmail is committed, which for all its rewards involves illusion and delusion — a flattering identification with suffering heroism, a holier-than-thou prig- gishness in the rush to empathise with oppression. To deplore this is to risk appearing stony-hearted. But what else is there to go on, in works of art, but their artistic workmanship — in music, the actu- al notes? All human experience can be encompassed and expressed in music's actual notes, when they show themselves to be capable of containing what's entrusted to them. Chez Shostakovich I submit that the intrinsic quality of most of the oeuvre is not strong enough to carry the weight currently put on it — which suggests in turn that what is required of it is lightweight too.