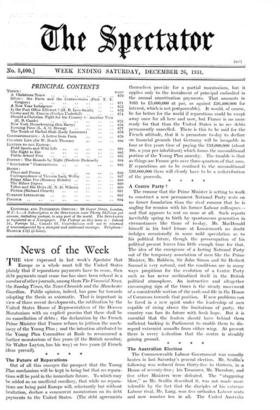 Page 1, 26 December 1931 — The Future of Reparations Out of all this emerges the
Close

The Future of Reparations Out of all this emerges the

prospect that the Young Plan mechanism will be kept in being but that no repara- tions will be paid in the immediate future. To which may be added as an unofficial corollary, that while no repara- tions are being paid Europe will, reluctantly but without hesitation, declare a concurrent moratorium on its debt payments to the United States. (The debt agreements- themselves provide for a partial moratorium, but it applies only to the instalment of principal embodied in the annual amortisation payments. That amounts in 1931 to £5,600,000 at par, as against £26,400,000 for interest, which is not postponeable). It would, of course, be far better for the world if reparations could be swept away once for all here and now, but France is no more ready for that than the United States is to see debts permanently cancelled. There is this to be said for the French that it is declare attitude, premature to-day to on financial grounds that Germany will be incapable in four or five years time of paying the £33,000,000 (about 10s. a year per inhabitant) which forms the unconditional portion of the Young Plan annuity. The trouble is that as things are France gets over three-quarters of that sum. If reparations are to be confined to the unconditional £33,000,000 there will clearly have to be a redistribution of the proceeds.