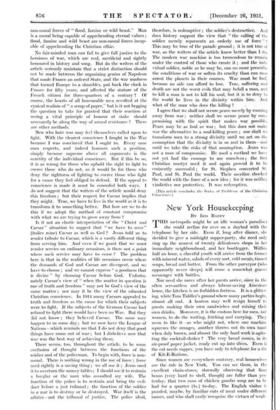 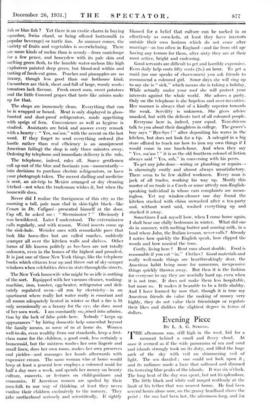 THIS metropolis might be an idle woman's paradise: she could recline for ever on a daybed with the telephone by her side. Even if, long after .dinner, she decided to give a midnight supper-party, she need only ring up the nearest of twenty delicatessen shops in her immediate neighbourhood, and her bootlegger. Within half an hour, a cheerful youth will arrive from the former with mineral water, salads of every sort, cold meats, tinned soups, bread and butter. From the other purveyor. (who apparently never sleeps) will come a somewhat graver messenger with bottles.

Nor need she move after her guests arrh-C, since iii.the often scrvantless and always labour-saving AM &kat) home, the kitchen is no forbidden fortress. It is a glitter- ing, white Tom Tiddler's ground where many parties begin, almost all end. A hostess may well resign. herself 1,, guests making their own sandwiches and mixing their own drinks. Moreover, it is the custom here for Men; not 'women, to do the waiting, fetching and carrying. ' They seem to like itas who might not, where one nia;Chine squeezes the oranges, another throws out its own' toast when duly brown, and almost the only hard workis agita- ting the cocktail-shaker ? . The very bread conies, in. its air-proof paper jacket, ready cut up into Slies. • Even if the cat needs supper, you have only to telephone for a tin of KitE-Rations: Since women are everywhere contrary, real housewives are the 'rule in New York. You can see them, in the excellent chain-stores, shrewdly observing that lima beans (very hard to shell, though) are fuller than yes- terday, that two cans of chicken gumbo soup are to ht had for a quarter (1s.) to-day. The English visitor i- puzzled, maybe, by familiar -ants of meat under. different names, and who shall the virtues of -weak- fish or blue fish ? Yet there is an exotic charm in buying squashes; Swiss chard, or being offered buttermilk (a popular beverage) or turtle fins. As summer comes, the variety of fruits and vegetables is overwhelming. There are more kinds of melon than is seemly—from eanteloupe for a few pence, and honeydew with its pale skin and melting green flesh, to the humble water-melons like high explosives painted deep green, but blood-red within and . tasting of fresh-cut grass. Peaches and pineapples are no luxury, though less good than our hothouse kind. Cucumbers are thick, short and full of large, woody seeds : tomatoes lack flavour. Fresh sweet corn, sweet potatoes and the little Concord grapes that taste like raisins make up for that.

The shops are immensely clean. Everything that can be is wrapped or boxed. Meat is only displayed in glass- fronted and dust-proof refrigerators, made appetizing with sprigs of fern. Convenience as well as hygiene is studied. Assistants are brisk and answer every remark with a-hearty : " Yes, ma'am.," with the accent on the last word. If they forget to send everything ordered (for hustle rather than real efficiency is an omnipresent American failing) the shop is only three minutes away. Ordering by telephone ana immediate delivery is the rule.

The telephone, indeed, rules all. Suave gentlemen call up out of the blue and fascinate you—momentarily- into decisions to purchase electric refrigerators, or have your photograph taken. The merest dialling and medicine is sent, an air-trip to Mexico arranged or dry cleaning fetched—not when the tradesman wishes it, but when the housewife does.

Never did I realize the foreignness of this city as the morning a tall, pale man clad in skin-tight black—like Cesare in Dr. Caligari—presented himself at the door. Cap off, he asked me : " Sterminator ? " Obviously I was bewildered. Later I understood. The exterminator calls regularly, and with reason. Weird insects come up the sink-hole. Weirder ones with remarkable pace that look like horse-flies but arc called roaches, suddenly scamper all over the kitchen walls and shelves. Other forms of life known politely as bee-bees are not totally unknown, even in the homes of the highest and proudest. It is just one of those New York things, like the telephone books which citizens tear up and throw out of sky-scraper windows When celebrities drive in state through the streets.

The New York housewife who might be so idle is nothing of the sort. Equipped with her vacuum cleaner, washing- maChine, iron, toaster, egg-beater, refrigerator and deli- cately regulated oven—all run by electricity—in an apartment where really hot water really is constant and all rooms adequately heated in winter so that a fire is lit only occasionally as a luxury for the eye, she does most of her own work. I am constantly sui-inised into admira- tion by the lack of false pride here. Nobody " keeps up appearances " by hiring domestic help somewhat beyond the family means, as some of us at home do. Women well-to-do, even wealthy from our standards, keep a first- class nurse for the children, a good cook, less certainly a houseMaid, but the mistress washes her own lingerie and small linen, does her own room, makes her own preserves and pickles—and massages her hands afterwards with expensive cream. The same woman who at home would keep at least a general here employs a coloured maid for half a day once a week, and spends her money on beauty culture, concerts, or lectures on child-guidance and economics. If American women arc. spoiled by their ;nen-folk to our way of thinking, at least they never confine their children exclusively to the nursery. They take „motherhood seriously ainl.scientifieally. If rightly blamed for a belief that culture can be sucked in as effortlessly as coca-kola, at least they have interests outside their own horizon which do not cease after marriage—as too often in England—and far from old age having any terrors for them, after sixty they are at their most active, bright and endearing.

Good servants are difficult to get and horribly expensive. Even daily help costs fifty cents (2s.) an hour. To get a maid (no one speaks of charwomen) you ask friends to recommend a coloured girl. Some days she will ring up to say she is " sick," which means she is taking a holiday. While actually under your roof she will protect your interests against the whole world. She adores a party. Only on the telephone is she hopeless and over-inventive. Her manner is always that of a kindly superior towards the weak. Servility is unknown. She gives advice unasked, but with the delicate tact of all coloured people.

Everyone here is, indeed, your equal. Taxi-drivers talk to you about their daughters in college. The grocer's boy says " Bye-bye " after depositing his wares in the kitchen, but does not look for a tip. A salesgirl in a big store offered to teach me how to iron my own things if I would come in one lunch-hour. And when they say " Yes, ma'am, ! " it is as the old Southern colonel of fiction always said " Yes, suh," in conversing with his peers.

To get any jobs done—wiring or plumbing or repairs— is alarmingly costly and almost always unsatisfactory. There seem to be few skilled workmen. Every man is jack of all trades, working his way up. Mostly this master of no trade is a Czech or some utterly non-English- speaking individual in whose cars complaints are mean- ingless. Yet my window-cleaner one day found the kitchen stacked with china unwashed after a tea-party and, without word said, washed everything up and stacked it away.

Sometimes I ask myself how, when I come home again, I shall bear our chilly bedrooms in winter. What did one do in summer, with melting butter and souring milk, in a land where John, the Italian iceman, never calls ? Already I notice how quickly the English speak, how clipped the words and how musical the tone.

Costly, living here ? Rent runs about double. Food is reasonable if you cat "in." Clothes ? Good materials and really well-made things are heartbreakingly dear, the American habit being more for numerous, inexpensive things quickly thrown away. But then it is the fashion for everyone to say they arc woefully hard up, even when it is not true. It does not make them less hospitable, but more so. It makes it bearable to be a little shabby. And I have learned by now that, though it is true my American friends do value the making of money very highly, they do not value their friendships or regulate their likes and dislikes the slightest degree in terms of dollars.