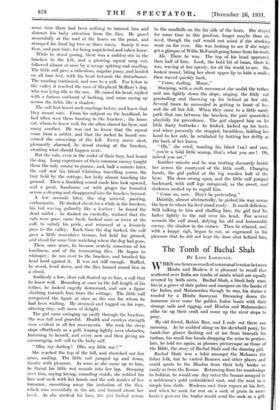 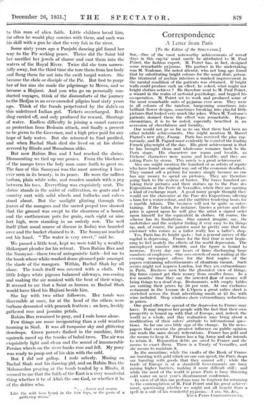 The Tomb of Bachal Shah

WHEN one hears so much of communal tension between Hindu and Moslem it is pleasant to recall that scattered over India are tombs of saints which are equally revered by both sects. Bachal Shah, a Sindi holy man. lies in a grove of date palms and mangoes on the banks of the Indus, and Mahomedan though he was, his shrine is tended by a Hindu Sannyasi. Dreaming down the immense river come the golden Indus boats with their strange sails and rigging, and Hindus and Mahomedans alike tie up their craft and come up the river steps to pray.

My old friend, Rahim Bux, and I rode out there one morning. As he ambled along on his skewbald pony, his hawk-line glance flashing out at me from beneath his turban, his small fine hands dropping the reins to gesticu- late, he told me again, in phrases picturesque as those of the Bible, the story of Bachal Shah and the dancing girl.

Bachal Shah was a fakir amongst the Mohanas the fisher folk, but he visited Benares and other places and could quote to the Hindus from their holy books as easily as from the Koran. Returning from his wanderings to Sukkur, he would one day enter the bazaar arrayed in a nobleman's gold embroidered coat, and the next in a simple loin cloth. Moslems cast their rupees at his feet, and when he sank for rest on a sack of grain in some bania's godown the trader would send the sack as a gift to this man of alien faith. Little children loved him, for often he would play cowries with them, and such was his skill with a gun he shot the very fish in the river.

Some sixty years ago a Punjabi dancing girl found her way to the Pir seeking peace. Thrice did the Saint bid her sacrifice her jewels of shame and cast them into the waters of the Royal River. Twice did she turn sorrow- fully away, but the third time she tore them from her body and flung them far out into the swift turgid waters. She became the chela or disciple of the Pir. But first to purge her of her sins she made the pilgrimage to Mecca, and so became a Hajiani. And you who go on personally con- ducted voyages, think of the discomforts of the journey to the Hedjaz in an over-crowded pilgrim boat sixty years ago. Think of the frauds perpetrated by the dales on this unlettered Indian girl. Tickets overcharged. Bed- ding carried off, and only produced for reward. Shortage of water. Endless difficulty in joining a camel caravan as protection from Bedouin attack, and finally a present to be given to the Governor, and a high price paid for any hope of holy water. But she returned to Sind purified, and when Bachal Shah died she lived on at his shrine revered by Hindu and Mussalman alike.

But now Rahim Bux and I had reached the shrine. Dismounting we tied up our ponies. From the blackness of the mango trees the holy man came forth to greet us. The face of this Sannyasi was the most arresting I have ever seen in its beauty, in its peace. He wore the saffron turban, plain white robe, and wooden. sandals with a peg between his toes. Everything was exquisitely neat. The shrine stands in the midst of cultivation, so goats and a country cart with solid wheels and bullocks and calves stood about. But the sunlight glinting through the leaves of the mangoes and the sacred peepul tree showed that the ground was swept to the cleanness of a board, and the earthenware pots for grain, each eight or nine feet high, were standing in an orderly row. The well itself (that usual source of disease in India) was boarded over and the bucket chained to it. The Sannyasi reached out his hand. " The water is very sweet," said he.

We passed a little tent, kept we were told by a wealthy Shikarpuri pleader for his retreat. Then Rahim Bux and the Sannyasi—these two of antagonistic faith—led me to the tomb whose white-washed dome gleamed pale amongst the shade of the mangoes. Within, Bachal Shah lay all alone. The tomb itself was covered with a cloth. On little ledges white pigeons balanced sideways, roo-cooing and making the air musical with the beat of their wings. It seemed to me that a Saint as human as Bachal Shah would have liked his Hajiani beside him.

She lay with two other followers. Her tomb was discernible at once, for at the head of the others were turbans decorated with peacock feathers ; on hers, freshly gathered rose and jasmine petals.

Rahim Bux remained to pray, and I rode home alone.

Few things are more invigorating than a cold weather morning in Sind. It was all turquoise sky and glittering dewdrops. Green parrots flashed in the sunshine, little squirrels raced up the trunks of babul trees. The air was exquisitely light and . clean and the sound of innumerable Persian wheels on the river banks rose and fell. My pony was ready to jump out of his skin with the cold.

But I did not gallop. I rode soberly. Musing on Bachal Shah and his dancing girl, and on Rahim Bux the Mahomedan praying at the tomb tended by a Hindu, it seemed to me that the faith of the East is a very wonderful thing whether it be of Allah the one God, or whether it be of the deities who. " . . . hover and swarm

Like the wild bees heard in the tree tops, or the gusts of a gathering storm."