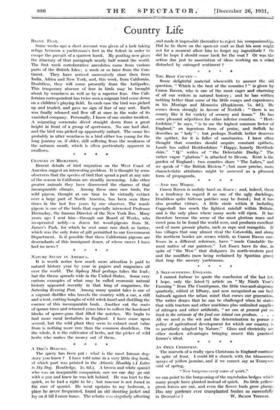 - The query has been put : what is the most human dog- story you know ? I have told mine in a very little dog book, of which part was printed in the Atlantic Monthly (A Letter to My Dog. Routledge. 2s. 6d.). A brown and white spaniel who was an inseparable companion, saw me one day go out With a gun and knew he was left behind. He was hurt to the quick, as he had a right to be ; but rancour is not found in the race of spaniel. He went upstairs to my • bedrooni, place he never frequented, found an old shooting jacket and lay on it till I came home. The rebuke was singularly affecting and made it impossible thereafter to reject his companionship. Did he lie there on the open-air coat so that his nose might not for a moment allow him to forget my ingratitude ? Or did he hope I should come back for the coat ? Or was the action due just to association of ideas working on- a mind disturbed by outraged sentiment ?