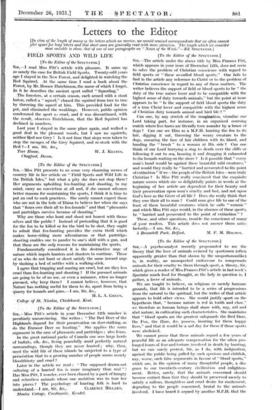 [To the Editor of the SPECTATOR.] SIR,—Miss Pitt presents to

us some very charming scenes of country life in her article on " Field Sports and Wild Life in the British Isles," but what a pity she does not stop there! Her arguments upholding fox-hunting and shooting, to my mind, carry no conviction at all and, if she cannot advance better reasons for maintaining the sports, I think it is time to put an end to such practices. She surely cannot expect those who are not in the toils of Diana to believe her when she says that "foxes owe their all to fox-hounds" and that "pheasants and partridges survive because of shooting."

Why are those who hunt and shoot not honest with them- selves and the public ? Instead of pretending that it is good for the fox to be killed or for the bird to be shot, they ought to admit that fox-hunting provides the extra thrill which makes horse-riding more adventurous or that partridge- shooting enables one to pander to one's skill with a gun, and that these are the only reasons for maintaining the sports.

Fundamentally considered it is the destructive urge of nature which impels hunters and shooters to continue. Those of us who do not hunt or shoot satisfy the same inward urge by slashing a bed of nettles with a walking-stick.

I agree that trapping and snaring are cruel, but are they less cruel than fox-hunting and shooting ? If the pursued animals are going to be of no use, or even a nuisance, when no longer Pursued, why keep them? I cannot believe, however, that Nature has nothing useful for them to do, apart from being a quarry for hounds and guns.—I am, Sir, &c.,