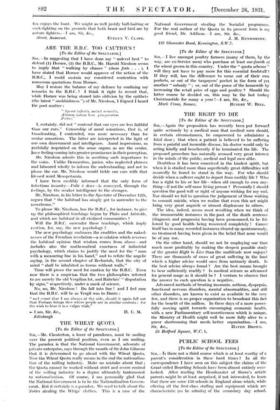 [To the Editor of the SPECTATOR.] SIR,—In suggesting that I have done my " unlevel best " to defend (1) Horace, (2) the B.B.C., Mr. Harold Nicolson seems to imply that walking by chance " (ibam forte . . . ), I have stated that Horace would approve of the action of the

/3.11.C., I could sustain my considered contention with numerous quotations from Horace.

May I restore the balance of my defence by confining my remarks to the B.B.C. ? I think it right to record that, while Horace was being stoned into oblivion by the epithets

(the latest " snobbishness ") of Mr. Nicolson, I feigned I heard the poet mutter :

I, certainly, did not " contend that our eyes are less faithful than our ears." Censorship of aural sensations, that is, of

broadcasting, I contended, was more necessary than for ocular sensations. The latter are interpreted in the light of our own discernment and intelligence. Aural impressions, as faithfully imprinted on the sense organs as are the ocular, have feeling coming into greater prominence in their perception.

Mr. Nicolson admits this in ascribing such importance to the voice. Unlike Democritus, junior, who neglected phrases and laboured wholly to inform the understanding, and not to please the ear, Mr. Nicolson would tickle our ears with that blessed word Mesopotamia.

I have been credibly informed that the only form of

infectious insanity—Folic a demx—is conveyed, through the feelings, by the weaker intelligence to the stronger.

Mr. Nicolson, in his letter to the Spectator of December 12th, argues that " the habitual has simply got to surrender to the Unwelcome."

To please Mr. Nicolson, has the B.B.C., for instance, to give tip the philosophical teachings begun by Plato and Aristotle, and which are habitual in all civilized communities ?

Will the B.B.C. surrender these teachings, which imply caution, for, say, the new psychology ?

The new psychology embraces the crudities and the naked- nesses of the Freudian revelation—a revelation which reverses the habitual opinion that wisdom comes from above—and includes also the mathematical exactness of industrial psychology, which claims to justify the need for the " man

with a measuring line in his hand," and to refute the angelic saying, In the second chapter of Zechariah, that the city of

mind " shall be inhabited as towns without walls."

Time will prove the need for caution by the B.B.C. Even now there is a suspicion that the two philosophies referred to are merely the old Vergilian lot, and Rabelais' " disputation by signs," respectively, under a mask of science.

No, no, Mr. Nieolson ! Do fall into line and I feel sure that the B.B.C. will be as Vergil was to Dante :

" and count that I am always at thy side, should it again fall out that Fortune brings thee where people are in similar contests : for the wish to hoar it is a vulgar wish."