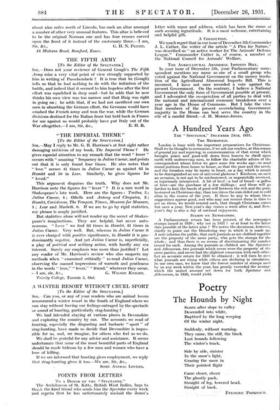 In your- issue of 'December 5th, your Parliamentary corre- spondent mentions my name as one of a small group who voted against the National Government on the money resolu- tion of the Agricultural Abnormal Imports Bill. This is incorrect. I have not once recorded a vote against the present Government. On the contrary, I believe a National Government the only form of Government possible at present, and I advocated the co-operation of all parties to deal with the national and international economic breakdown over a year ago in the House of Commons. But I take the view that members of the present overwhelming Government majority in the House can best serve the country in the role of a candid friend.—J. H. MORRIS-JONES.