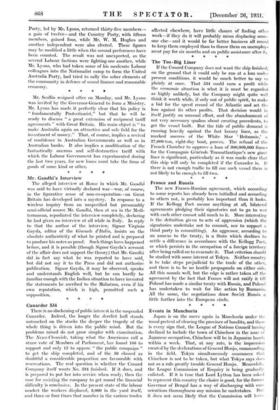 The Too - Big Liner If the Cunard Company does not want

the ship finished, on the ground that it could only be run at a loss- under present conditions, it would be much better to say so plainly at once. That 534 could earn a profit while the economic situation is what it is must be regarded. as highly unlikely, but the Company might quite well think it worth while, if only out of public spirit, to make a bid for the speed record of the Atlantic and. set .the loss against its other profits. That decision would in itself justify an unusual effort, and the abandonment or not very necessary qualms about creating precedents, to get the vessel built. But the tide of public demand is running heavily against the fast luxury .liner, as the marked success of the White Star ' Britannic,' a 27,000-ton, eight-day boat, proves. The refusal of:Ala! French Chamber to approve a loan of 300,000,000 francs for the Compagnie Generale .Transatlantique's new giant liner is significant, particularly as it was made clear that this ship will only be completed if the Cunarder is. I If there is not enough traffic to fill one such vessel there is not likely to be enough to fill two.