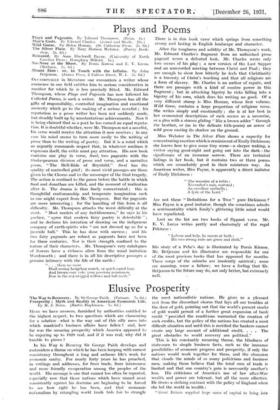 shop. 2s. Gd.) Mount Zion : or, In Touch with the Infinite. By John . Betjeman. (James Press, 3 Culross Street, W. I. Ss. 6d.) - OCCASIONALLY in literature one encounters a writer whose eminence in one field entitles him to serious consideration in another for which he is less precisely fitted. Mr. Edward Thompson, whose Plays and Pageants has now followed his Collected Poems, is such a writer. Mr. Thompson has all the gifts of responsibility, controlled imagination and emotional austerity which go to the making of a serious novelist ; his reputation as a prose writer has been not suddenly made, but steadily built up by unostentatious achievements. Now it is being claimed that as a poet he has earned an equal reputa- tion. It is doubtful whether, were Mr. Thompson not a novelist, his verse would receive the attention it now receives ; in any case his mind seems to turn more easily to the writing of prose than to the writing .of poetry. But it is a mind which so urgently commands respect that, in whatever medium it expresses itself, the critic must pay attention. His new book contains one play in verse, Saul, two pageants with the Shakespearean division of proSe and verse, and a narrative poem, " The Hell-Ride of Brynhild." Saul has the quality of controlled grief ; its most vivid passages are those given to the Chorus and to the messenger of the final tragedy. The action is confined to the pause before the battle in which Saul and Jonathan are killed, and the moment of realization after it. The drama is thus finely concentrated ; this is thoughtful craftsmanship and temperate imagination such as one might expect from Mr. Thompson. But the pageants are more interesting ; for the handling of this form is all difficulty: Mr. Thompson attacks the worst difficulty at the start. " Most readers of any fastidiousness," he says in his preface, " agree that modern fairy poetry is detestable " ; and he declares his intention of drawing on the indigenous company of earth-spirits who " are not dressed up as for a juvenile ball." This he has done with success ; and his two fairy pageants are robust as pageants have not been for three centuries. Nor is their strength confined to the nature of their characters. Mr. Thompson's very catalogues of flowers have a richness alien from the usual imitation Wordsworth ; and there is in all his descriptive passages a genuine intimacy with the life of the earth : " . . . there no more Shall nosing hedgehog search, or quick-eared hare And brown-coat vole, your precious pensioners, Run in the red-twigged willows and tall reeds." . There is in this book verse which springs from something strong and lasting in English landscape and character.

After the toughness and solidity of Mr. Thompson's work, Mr. Edward Charles's fragment from an unfinished prose pageant wears a defeated look. Mr: Charles wrote only two scenes of his play ; a new version of the Last Supper and an unrecorded meeting between Christ and Paul ; they are enough to show how bitterly he feels that Christianity is a travesty of Christ's teaching and that all religions are a form of slavery. Mr. Charles is an author of repute, and there are passages with a kind of sombre power in this fragment ; but in attacking bigotry he risks falling into a bigotry of his own, which does his writing no good. Of a very different stamp is Miss Homan, whose first volume, -Wild Geese, contains a large proportion of religious verse.

She writes simply and emotionally ; she is at her best in her economical descriptions of such scenes as a moonrise, or a glen with a stream gliding " like a brown. adder " through the heather, or (as in the delicate title-poem) an arrow of wild geese casting its shadow on the ground.

Miss Webster in The Silver Flute shows a capacity for concentrating emotion which is reminiscent of Emily Dickinson; she knows how to give some tiny scene—a sleeper waking, a visitor saying good-night and going out into the dark—the significance of an immense sorrow. There are technical failings in her book, but it contains two or three poems which are remarkably good in their miniature way. An American writer, Miss Payne, is apparently a direct imitator of Emily Dickinson : " The mansion of 41, robin - November's ruin, restored ; An excellent umbrella ; A lyric of the Lord."

Are not these " Definitions for a Tree" pure Dickinson ? Miss Payne is a good imitator, though she sometimes admits a sentimentality which Emily's glittering little mind would have repudiated.

Last on the list are two books of flippant verse. Mr.

E. V. Lucas writes pertly and charmingly of the regal Pekinese : " Labour and help, he sneers at both : His two strong suits are grace and sloth."

His story of a Peke's day is illustrated by Persis Kirmse, Mr. Betjeman and his illustrator are responsible for one of the most precious books that has appeared for months. These songs of the suburbs are insolently satirical ; some are- amusing, some a failure; we have a feeling that Mr. Betjeman in the future may-do, not only better, but extremely well.