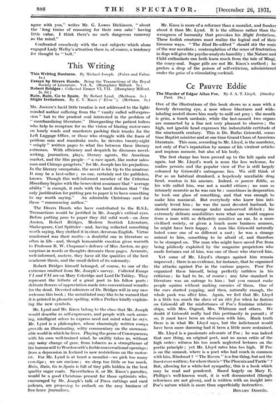 Page 22, 26 December 1931 — This Writing Essays by Divers Hands. Being the Transactions of
Close

This Writing Essays by Divers Hands. Being the Transactions of

Ma. JOSEPH'S lucid little treatise is not addressed to the light- minded author suffering from the " vanity called self-expres-

sion " but to the prudent soul interested in the problem of merehandizing literature." Disregarding the patient toilers who help to recapture for us the vision of blazing motor-cars on lonely roads and murderers packing their trunks for the Left Luggage Office, or those who struggle with the foam of perilous seas and mandrake roots, he devotes twenty-eight "crisply" written pages to what lies between these literary extremes. With efficiency and despatch he discusses novel- writing, journalism, plays, literary agents, the American market, and the film people—" a race apart, like motor sales- men and Chicago gangsters," for Mr. Joseph has his prejudices. In the literary sweepstake, the novel is his tip to the amateur. It may be a best-seller ; no one, certainly not the publisher, knows. Though this well-informed member of the Criterion Miscellany begins with the benevolent assurance that " average ability " is enough, it ends with the hard dictum that " the only justification for putting pen to paper is to have something to say worth saying." An admirable Christmas card for those " commencing author."

The Divers Hands who have contributed to the R.S.L. Transactions would be justified in Mr. Joseph's critical eyes. Before putting pens to paper they did solid work—on Jane Austen, Robert Bridges, Modern Scottish Literature, Shakespeare, Carl Spitteler—and, having collected something worth saying, they clothed it in clear, decorous English. Virtue unadorned was their motto—a doubtful one in literature as often in life—and, though honourable emotion gives warmth to Professor R. W. Chapman's defence of Miss Austen, no gay surprises in words or thoughts decorate these pages. Accurate, well-informed, austere, they have all the qualities of the best academic thesis, and the small defect of its solemnity.

Robert Bridges himself belonged, of course, to one of the extremes omitted from Mr. Joseph's survey. Collected Essays VI and VII are on Mary Coleridge and Lord De Tabley. They represent the tribute of a great poet to his fellow poets : delicate flowers of appreciation made into conventional wreaths for the dead. Devoted admirers of Dr. Bridges will in any case welcome this book ; the uninitiated may like to be warned that it is printed in phonetic spelling, with a Preface kindly explain- ing the new symbols.

Mr. Lynd and Mr. Knox belong to the class that Mr. Joseph would describe as self-expressers, and people with such amus- ing, intelligent selves to express need not mind what he says. Mr. Lynd is a philosopher, whose charmingly written essays provide an illuminating, witty commentary on the unreason- able world in which he lives. Playing the game of Consequences with his own well-trained mind, he swiftly takes us, without any noisy change of gear, from tobacco as a strengthener of the human will to Wordsworth's feeble conversational openings : from a depression in Iceland to new restrictions on the motor- ist. For Mr. Lynd is at heart a moralist—we pick too many cowslips ; we are envious ; we sleep too little or too much. Rain, Rain, Go to Spain is full of tiny pills hidden in the best quality sugar coats. Nevertheless it, or Mr. Knox's parodies, would be a good Christmas present for those optimists who, encouraged by Mr. Joseph's talk of Press cuttings and card indexes, are proposing to embark on the easy business of free-lance journalism. Mr. Knox is more of a reformer than a moralist, and franker about it than Mr. Lynd. It is the silliness rather than the wrongness of humanity that provokes his Slight Irritations. These foolish creatures must realize the logical end of their tiresome ways. " The Iliad Re-edited " should stir the souls of the war novelists ; contemplation of the sense of frustration in dogs will give the psycho-analysts humility ; the Nature and Child enthusiasts can both learn much from the tale of Mingi, the coney-seal. Sugar pills are not Mr. Iinox*s method ; he prefers a drop of the poison of self-criticism, administered under the guise of a stimulating cocktail.