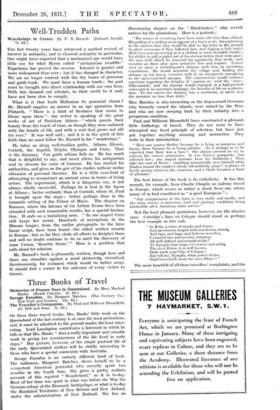 THE kit twenty years have witnessed a marked revival of interest in antiquity, and in classical antiquity in particular. One might have expected that a mechanised age would have little use for what Byron called " antiquarian twaddle." Experience has proved the reverse. Interest is greater and more widespread than ever; but it has changed in character. We are no longer content with the dry bones of grammar and guide-book. We must have a human touch ; the past must be brought into direct relationship with our own lives. With this demand our scholars, to their credit be it said, have not been slow to comply.

What is it that lends Hellenism its perennial charm ? Mr. Burnell supplies an answer in an apt quotation from Plutarch. " There is a kind of freshness that seems to bloom upon them "—the writer is speaking of the great works of art of Periclean Athens—" which guards their beauty from the touch of time, as though they were endowed with the breath of life, and with a soul that grows not old for ever." It was well said ; and it is in the spirit of this faith that we must follow Mr. Burnell in his " wanderings."

He takes us along well-trodden paths. Athens, Eleusis, Corinth, the Argolid, Delphi, Olympia and Crete. That is the itinerary. Our guide seldom fails us. He has much that is delightful to say, and never allows his antiquarian zeal to obscure his sense of humour. He has studied his authorities, and gives us the gist of his studies without undue obtrusion of personal theories. He is a little over-fond of attempting to reconstruct an ancient scene in terms of living actors. The experiment, which is a dangerous one, is not always wholly successful. Perhaps he is best in the Agora at Athens ; better certainly than at Corinth, where St. Paul is brought upon the stage : better perhaps than in the romantic setting of the Palace of Minos. The chapter on Knossos, where the labours of Sir Arthur Evans have been attended with such remarkable results, has a special fascina- tion. It ends on a tantalizing note. " In one respect Crete still keeps her secret. Hundreds of inscriptions in the Minoan tongue, from the earlier pictographs to the later linear script, have been found—the oldest written records in Europe—but so far they elude all efforts to decipher them and will no doubt continue to do so until the discovery of some Cretan Rosetta Stone.' " Here is a problem that calls aloud for solution.

Mr. Burnell's book is pleasantly written, though here and there one stumbles against a word (historicity, eternalized, Swinburnianly, for instance) which would be better away. It should find a corner in the suit-case of every visitor to Greece.