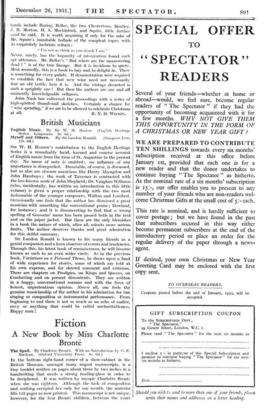 SIR W. H. HAnow's contribution to the English Heritage Series is a remarkably lucid, learned and concise account of English music from the time of St. Augustine to the present day. No name of note is omitted ; no influence of any importance is disregarded. Dunstable, of course, is discussed, but so also are obscure musicians like Henry Abyngdon and John Hamboys ; the work of Taverner is contrasted with the less-known work of John Shepherd ; Dr. Vaughan Williams (who, incidentally, has written an introduction to this little volume) is given a proper relationship with the two most fashionable of the younger composers, Walton and Lambert. Occasionally one feels that the author has dismissed a great musician with something like conventional praise ; Dowland, for instance ; and it is disconcerting to find that a wrong spelling of Goossens' name has been passed both in the text and on the paper jacket. But these are the only blemishes in a book the nature of which, after all, admits more serious faults. The author deserves thanks and great admiration for this skilful summary.

Sir Landon Ronald is known to his many friends as a genial companion and a keen observer of events and tendencies. Through this, his latest book of reminiscences, he will become known as such to an even wider circle. As in the previous book, Variations on a Personal Theme, he draws upon a fund of wide experience for stories, some of which are told at his own expense, and for shrewd comment and criticism. There are chapters on Prodigies, on Kings and Queens, on Conducting and on present discontents. They are written in a happy, conversational manner and with the force of honest, unpretentious opinion. Above all, one feels the genuine musicianship of the author in his admiration for fine singing or composition or instrumental performance. From beginning to end there is not so much as an echo of malice, envy or anything that could be called uncharitableness. Happy man !