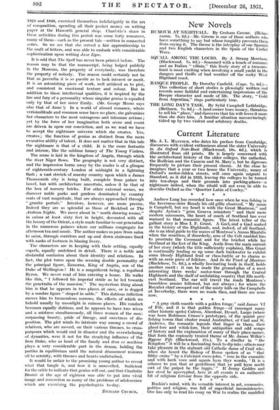 Page 26, 26 December 1931 — Andrew Lang has recorded how once when he was fishing
Close

Andrew Lang has recorded how once when he was fishing

in the Inverness-shire Beauly his old gillie observed, " My name is Campbell, but my heart is with the Great Montrose," and despite Ayton's " grim Geneva ministers " and their more modern successors, the heart of much of Scotland has ever warmed to that romantic figure. The latest teller of the gallant story is Miss I. F. Grant. A Gael, and a Gael soaked in the history of the Highlands, and, indeed, of all Scotland, she is an ideal guide to the mazes of Montrose's Annus Mirabilis when the resistless, if disorderly, arm of the Celt enabled him to prostrate the Covenant and for the briefest while lay Scotland at the feet of the King. Aside from the main current of her story (which the title sufficiently explains), Miss Grant is continually leading us up some dark backwater to exhibit some bloody Highland feud or class-battle or to charm us with an eerie piece of folklore. And In the Track of Montrose (Maclehose, 7s. 6d.), a wholly fascinating book in itself, holds another merit : it can be made the ground-plan of a most interesting three weeks' motor-tour through the Central Highlands and the shelf of undulating country that fills north- east Scotland. The car will travel the roads Montrose's breechless armies followed, but not always ; for where the Royalist chief swooped out of the misty hills on the Campbells at Inverlochy, there were no roads then, and there are none now.