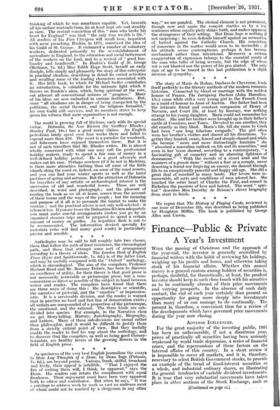 Page 28, 26 December 1931 — As specimens of the very best English journalism the essays
Close

As specimens of the very best English journalism the essays

in More Lay Thoughts of a Dean, by Dean Inge (Putnam, 7s. Od.), are beyond praise. Various, frank, skilful, trenchant and lively, their appeal is infallible. " That I enjoyed the fun of writing them will, I think, be apparent," says the Dean. His readers can return the compliment with equal frankness. Their enjoyment must have been very apparent both to editor and contributor. But when he says, " It was a privilege to address week by week so vast an audience most of whom could not be reached by a clergyman in any other way," we are puzzled. The clerical element is not prominent, though now and again the essayist startles us by a few sentences whose mystic piety shines forth, and makes apparent the strangeness of their setting. But Dean Inge is nothing if not surprising ; he even defends himself against an accusation of hatred against the Catholic Church. His conviction of innocence in the matter would seem to be invincible ; if his attitude seems contemptuous, perhaps it has become mechanical rather than intentional. Moreover a certain exaggeration of expression belongs to the essential youth of the man who talks of being seventy, but the edge of whose wit is not blunted nor the power of his pen abated. The only sign of age to be traced in this last publication is a slight increase of sympathy.