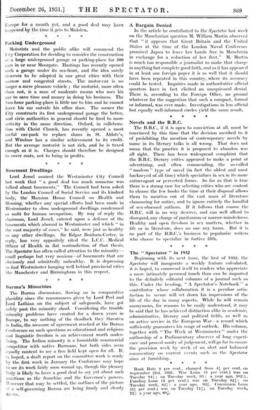 flowing on in comparative placidity since the reassurances given by Lord Peel and Lord Lothian on the subject of safeguards, have got safely past. the minority shoal. Considering the trouble minority problems have created for a dozen years in Europe,; to say nothing of the deadlock they threaten in India,...the measure of agreement reached at the Burma Conference:on such questions as educational and religious and linguistic freedom is an achievement worth under- lining. The Indian minority is a formidable commercial tompetitor . with native Burmans, but both sides seem equally content to sec a free field kept open for all. If, as hoped, a draft report on the committee work is ready by the first week in. January the Conference may hope to see its work fairly, soon wound up, though the plenary body is likely. to have a good deal to say yet about such questions as the franchise. and the Governor's powers. 'However that may be settled, the outlines of the picture of a self-governing Burma arc being firmly and clearly