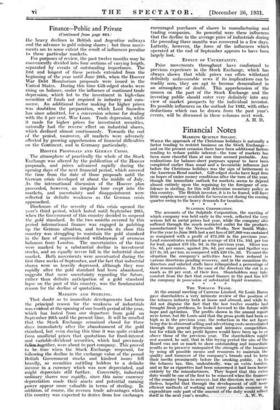 That doubt as to immediate developments had been the principal reason for the weakness of industrials was evident at the opening of our fourth period of the year, .which has lasted from our departure from gold on September 20th until the present time. It will be recalled that the Stock Exchange remained closed for three days immediately after the abandonment of the gold standard, but even during this time it was quite evident from unofficial- prices that quotations for fixed-interest and variable-dividend securities, which had previously fallea4agether, were about to part company. This proved to .13e,true when the Stock Exchange reopened, for following the decline in the exchange value of the pound British Government stocks and kindred issues fell heavily, as securities entitling holders to a definite income in a currency which was now depreciated, and might depreciate still further. Conversely, industrial ordinary. shares rose rapidly, since this same currency depreciation made their assets and potential earning power appear more valuable in terms of sterling. In addition, of course, the oversea trade advantages which, this country was expected to derive from low exchanges encouraged purchases of shares in manufacturing and trading companies. So powerful were these influences that the decline in the average price of industrials during the preceding three months was recovered in a few days. Latterly, however, the force of the influences which operated at the end of September appears to have been largely lost.