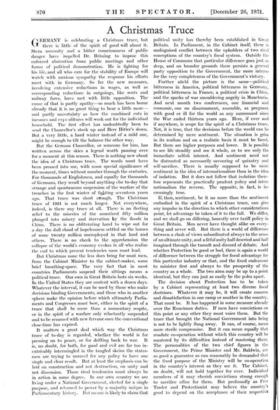 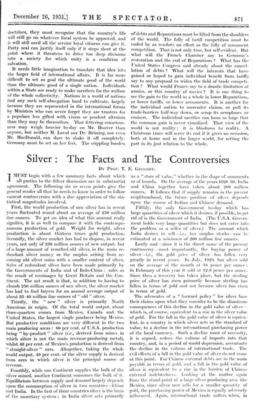 GERMANY is celebrating a Christmas truce, but there is little of the spirit of good will about it. Stern necessity and a hitter consciousness of public danger have impelled Dr. Bruning to impose this enforced abstention from public meetings and other forms of political demonstration. He is fighting for his life, and all who care for the stability of Europe will watch with anxious sympathy the response his efforts meet with in Germany. So far the new measures, involving extensive reductions in wages, as well as corresponding reductions in outgoings, like rents and railway fares, have met with little opposition. The cause of that is partly apathy—so much has been borne already that it is no great thing to bear a little more— and partly uncertainty as how the combined cuts in incomes and expeaditures will work out for the individual household. The first effect has undoubtedly been to send the Chancellor's stock up and Herr Hitler's down. But a very little, a hard winter instead of a mild one, might be enough to tilt the balance the other way.

But the German Chancellor, or someone for him, has written across the skies a legend worth pausing over for a moment at this season. There is nothing new about the idea of a Christmas truce. The words must have been pressed into use, with some special significance of the moment, times without number through the centuries. For thousands of Englishmen, and equally for thousands of Germans, they recall beyond anything else to-day that strange and spontaneous suspension of the warfare of the trenches in the first winter of fighting seventeen years ago. That truce was short enough. The Christmas truce of 1931 is not much longer. Not everywhere, indeed, is there any truce at all. There is no fleeting relief to the miseries of the unnoticed fifty million plunged into misery and Starvation by the floods in China. There is no obliterating hand to wipe out for a day the dull cloud of hopelessness settled on the homes of some twenty million unemployed in that land and others. There . is no check to the apprehension the collapse of the world's economy evokes in all who realize the end to which present tendencies soon must lead.

But Christmas none the less does bring for most men, from the Cabinet Minister to the cabinet-maker, some brief breathing-space. The very fact that in most countries Parliaments suspend their sittings means a political truce. Our own in Great Britain lasts six weeks. In the United States they are content with a dozen days. Whatever the interval, it can be used by those who make decisions binding Governments, and those who in another sphere make the opinion before which ultimately Parlia- ments and Congresses must bow, either in the spirit of a truce that shall be more than a momentary respite, or in the spirit of a warfare only reluctantly suspended and to be resumed with new fervour once the conventional close-time has expired.

It matters a great deal which way the Christmas truce of to-day is regarded, whether the world is for pressing on to peace, or for drifting back to war. It is, no doubt, for both, for good and evil are far too in- extricably intermingled in the tangled skeins the states- men are trying to unravel for any policy to have one single and clear result. But at least the emphasis can be laid on construction and not destruction, on unity and not dissension. Those rival tendencies must always be in action in some degree. In our own country we are living under a National Government, elected for a single purpose, and returned to power by a majority unique in Parliamentary history. But no one is likely to claim that political unity has thereby been established in Great Britain. In Parliament, in the Cabinet itself, there is undisguised conflict between the upholders of two rival conceptions of the country's fiscal system. Outside the House of Commons that particular difference goes just. as deep, and on broader grounds there persists, a ,general party opposition to . the Government, the more intense for the very completeness of the Government's victory.

Further afield the picture is the same—political bitterness in America, political bitterness in Germany, political bitterness in France, a political crisis in China, and the sparks of war smouldering angrily in Manchuria. And next month two conferences, one financial and economic, one on disarmament, assemble, as pregnant with good or ill for the world as any summoned since the War ended thirteen years ago. Here, if ever and if anywhere, is scope for the spirit of a Christmas truce. Not, it is true, that the decisions before the world can be determined by mere sentiment. The situation is grim in its realism and on a realistic basis it must be faced. But there are higher purposes and lower. It is possible to see life steadily and see it whole, or to see only the immediate selfish interest. And sentiment need not be distrusted as necessarily savouring of quixotry and self-sacrifice. There is usually supposed to be more sentiment in the idea of internationalism than in the idea of isolation. But it does not follow that isolation there- fore represents the practically prudent policy and inter- nationalism the reverse. The opposite, in fact, is in- creasingly true.

If, then, sentiment, be it no more than the sentiment embodied in the spirit of a Christmas truce, can give any impulse in the direction to which other considerations point, let advantage be taken of it to the full. We differ, and we shall go on differing, honestly over tariff policy in Great Britain. Men never have thought alike on every- thing and never will. But there is a world of difference between a clash of views subordinated always to the sense of an ultimate unity, and a fitful unity half descried and half imagined through the tumult and discord of debate. And whether Protection be good or bad, there is again a world of difference between the struggle for fiscal advantage for this particular industry or that, and the fixed endeavour to minister first and always to the prosperity of the country as a whole. The two aims may be up to a point identical, but they can just as easily be the poles apart.

The decision about Protection has to be taken by a Cabinet representing at least two diverse fiscal doctrines. Whatever it may be, it will create concern and dissatisfaction in one camp or another in the country. That must be. It has happened in some measure already over the Runciman duties. If men have convictions on this point or any other they must voice them. But the truce that brought the National Government into being is not to be lightly flung away. It can, of course, mean mere sterile compromise. But it can mean equally that resolute co-operation without which this country will be mastered by its difficulties instead of mastering them. The personalities of the two chief figures in the Government, the Prime Minister and Mr. Baldwin, are as good a guarantee as can reasonably be demanded that the fixed purpose of the Ministry will be co-operation in the country's interest as they see it. The Cabinet, no doubt, will not hold together for ever. Individual members of. it may cherish convictions strong enough to sacrifice office for them. But profoundly as Free Trader and Protectionist may believe the country's good to depend on the acceptance of their respective doctrines, they must recognize that the country's life will still go on whatever fiscal system be approved, and it will still need all the service loyal citizens can give it. Party zeal can justify itself only if it stops short at the point where it threatens to drive too deep divisions into a society for which unity is a condition of salvation.

It needs little imagination to translate that idea into the larger field of international affairs. It is far more difficult to set as goal the ultimate good of the world than the ultimate good of a single nation. Individuals within a State are ready to make sacrifices for the welfare of the whole collectivity. Nations in a world of nations find any such self-abnegation hard to cultivate, largely because they are represented in the international forum by Ministers who can never forget they are trustees for a populace less gifted with vision or prudent altruism than they may be themselves. That fettering conscious- ness may weigh heavier to-day on Mr. Hoover than anyone, but neither M. Laval nor Dr. Bruning, nor even Mr. MacDonald, can dare to shake it off completely. Germany must be set on her feet. The crippling burden of debts and Reparations must be lifted from the shoulders of the world. The folly of tariff competition must be ended by as resolute an effort as the folly of armament competition. That is not only true, but self-evident. But what will the French Chamber say to Germany's restoration and the end of Reparations ? What has the United States Congress said already about the cancel- lation of debts ? What will the interests that have gained or hoped to gain individual benefit from tariff: say to any proposal to widen the field of trade competi- tion ? What would France say to a drastic limitation of armies, or this country of navies ? It is one thing to see the gain to the world as a whole in lower Reparations, or lower tariffs, or lower armaments. It is another for the individual nation to surrender claims, or pull its trade-barriers half-way down, or scrap its aeroplanes or cruisers. The individual sacrifice can loom so large that the common gain is never visualized. That view of the world is not reality ; it is blindness to reality. A Christmas truce will serve its end if it gives an occasion, both at home and in the larger world, for setting the part in its just relation to the whole.