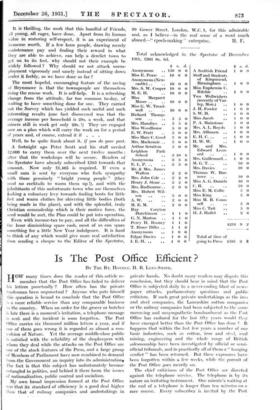 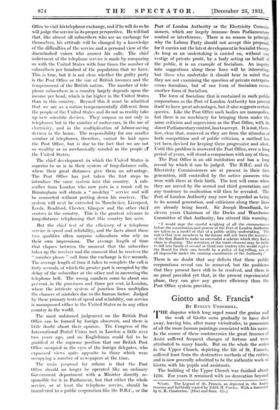 TIOW many times does the reader of this article re- member that -the Post Office has failed to deliver his letters punctually ? How often has the private tradesnian been unpunctual ? Anyone who puts himself this question is bound to conclude that the Post Office is a 'more reliable service than any comparable business in the country. When an order for the grocer or butcher is late there is a moment's irritation, a telephone message is .scrit and the. incident is soon forgotten. The Post Office' carries six thousand million letters a year, and if one of thein goes wrong it is regarded as almost a eon- vulsion of Nature. Yet the average middle-class public is satisfied 'with the reliability of the shopkeepers with whom theY deal while the attacks on the Post Office are one of the stock features of the Press, and a large group of Members of Parliament have now combined to demand fromrthe Government an inquiry into its administration. The fact is that this, subject has unfortunately become a entangled in politics, and behind it there loom the issues of nationalization, public control and socialism.

My own broad impression formed at the Post Office was.that its standard of efficiency is a good deal higher lawn that" of railway companies and _undertakings in private hands. No doubt many readers may dispute this conclusion, but. they should bear in mind that the Post Office is subjected daily to a never-ending blast of news- paper attacks, parliamentary questions and public criticism.- If such great private undertakings as the iron and steel companies, the Lancashire cotton companies or the railway companies had been subjected to the same unceasing and unsympathetic bombardment as the Post Office has endured for the last fifty years would they have emerged better than the Post Office has done ? It happens that within the last few years a number of our basic industries, such as cotton, iron and steel, coal mining, engineering and the whole range of British salesmanship have been investigated by official or semi- official tribunals, and in practically all of them a " hanging verdict " has been returned. But these exposures have been forgotten within a few weeks, while the pursuit of the Post Office goes merrily on.

The chief criticisms of the Post Office are directed against the telephone service. The telephone is by its nature an irritating instrument. One minute's waiting at the end of a telephone is longer than ten minutes on .a race course. Every 'subscriber is invited by the Post Office to visit his telephone exchange, and if he will do so he . will judge the service in its proper perspective. He will find that, like almost all subscribers who see an exchange for themselves, his attitude will be changed by a knowledge of the difficulties of the service and a personal view of the disembodied voices who answer his calls. The chief indictment of the telephone service is made by comparing us with the United States with four times the number of subscribers per hundred of the population that we have. This is true, but it is not clear whether the guilty party is the Post Office or the size of British incomes and the temperament of the British nation. The number of tele- phone subscribers in a country largely depends upon the income per head, which is far higher in the United States than in this country. Beyond this it must be admitted that we arc as a nation temperamentally different from the people-of the United States and do not so readily take up new scientific devices. They surpass us not only in telephones but in the number of motor-cars, in the use of electricity, and in the multiplication of labour-saving devices in the home. The responsibility for our smaller number of telephones, therefore, cannot be laid upon the Post Office, but is due to the fact that we are not so wealthy or so mechanically minded as the people .f the United States.

The chief development in which the United States is superior to us is in their system of long-distance calls, where their great distances give them an advantage. The Post Office has just taken the first steps to introduce the same system into this country. A sub- scriber from London who now puts in a trunk call to Birmingham will obtain a " no-delay " service and will he connected without putting down his receiver. The system will . next. be extended to Manchester, Liverpool, Leeds, Bradford, Chester, Glasgow and the other chRf centres in the country. This is the greatest advance in long-distance telephoning that this country has seen.

But the chief test of the efficiency of a telephone service is speed and reliability, and the facts about these two qualities often surprise subscribers who rely on their own impressions. The average .length of time that elapses between the moment that the subscriber takes up the receiver and the moment that he receives.the " number please " call from the exchange is five seconds. The average length of time it takes to complete the call is forty seconds, of which the greater part is occupied by the delay of the subscriber at the other end in answering the telephone bell. The wrong numbers come to about one per cent. in the provinces and three per cent. in London, where the intricate system of junction lines multiplies the chances of mistakes due to the human factor. Judged by these primary tests of speed and reliability, our service is unsurpassed either in the United States or in any other country in the world.

The most unbiassed judgement on the British Post Office can be formed by foreign observers, and there is little doubt about their opinion. The Congress of the International Postal Union met in London a little over two years ago, and no Englishman could fail to be gratified at the supreme position that our British Post Office occupied in the eyes of the foreign delegates, who expressed views quite opposite to those which were occupying a number of newspapers at the time.

The main proposal for reform is that the Post Office should no longer be operated like an ordinary Government department with a Minister directly re- sponsible for it in Parliament, but that either the whole service, or at least the telephone service, should be transferred to a public corporation like the B.B.C., or the Port of London Authority or the Electricity Commis. sioners, which are largely immune from Parliamentary control or interference. There is no reason in principle why the Labour Party should not accept this proposal, ' for it carries out the latest development in Socialist theory, As long as an undertaking is carried on, without any vestige of private profit, by a body acting on behalf of the public, it is an example of Socialism. An inquiry into suggestions along these lines will be interesting, but those who undertake it should bear in mind that they are not examining the question of private enterprise versus Socialism, but of one form of Socialism versus another form of Socialism.

The form of Socialism that is contained in such public corporations as the Port of London Authority has proved itself to have great advantages, but it also suggests certain queries. Like the Post Office such bodies are monopolies, but there is no machinery for bringing them under the same criticism and supervision as the Post Office, with its direct Parliamentary control, has to accept. It is not, there- fore, clear that, removed as they are from the stimulus of both competition and of public criticism, a method has yet been devised for keeping them progressive and alert. Until this problem is answered the Post Office, over a long period of years, will stand a comparison with any of them.

The Post Office is an old institution and has a long record by which it can be judged. The B.B.C. and the Electricity Commissioners are at present in their first generation, still controlled by the active pioneers who were .with them at their birth. The test will come when they are served by the second and third generation, and any tendency to ossification will then be revealed. The Port of London Authority may now be regarded as being in its second generation, and criticisms along these lines are already being heard. Sir Joseph Broodbank, for eleven years Chairman of the Docks and Warehouse Committee of that Authority, has uttered this warning : " I would urge the careful weighing of all the circumstances before the constitution and powers of the Port of London Authority are taken as a model of that of a public utility undertaking. The risk is that new members in the future will not have the incentive of the first Board to make as successful a scheme which they had a share in shaping. The retention of the trade element may be liable to fall into hands of second or third-rate traders who would exploit the Board for their own benefit by a policy of log-rolling, not at all impossible under the existing constitution of the Authority."

There is no doubt that- any defects that these public corporations reveal can be removed, but the problems that they present have still to be resolved, and there is no proof provided yet that, in the present experimental phase, they can give any greater efficiency than the Post Office system provides.