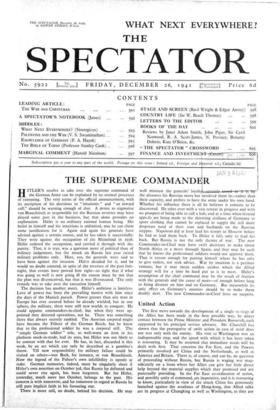 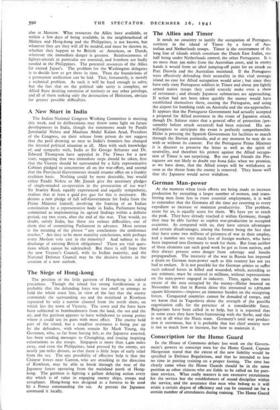 The first move towards the development of a single st:ategy of the Allies has been made in the best possible way, by direct contact between the Prime Minister and President Roosevelt, each supported by his principal service advisers. Mr. Churchill has shown that the prerogative of swift action in case of need does not rest only with the enemy. His visit to Washington was an indispensable step, and the speed with which it has been taken is reassuring. It may be assumed that immediate needs will be dealt with first. That concerns the Far East, and the Powers primarily involved are China and the Netherlands, as well as America and Britain. There is, of course, and can be, no question of proceeding without Russia, but Russia is waging war mag- nificently on a front where her Allies can give her little direct help beyond the material supplies which they promised and are punctually providing. In the Far East co-ordination of action, and possibly unity of command, are imperative, and it is reassuring to know, particularly in view of the attack China has generously launched against the assailants of Hong-kong, that Allied talks are in progress at Chungking as well as Washington, as they are

also at Moscow. What resources the Allies have available, or within a few days of being available, in the neighbourhood of Malaya and Hong-kong and the Philippines, is not known, but whatever they are they will all be needed, and must be thrown in, whether they happen to be British or American, or Dutch, wherever the immediate danger is greatest. Reinforcements of fighter-aircraft in particular are essential, and bombers are badly needed in the Philippines. The potential resources of the Allies far exceed Japan's. The problem for the Washington delegates is to decide how to get there in time. Then the foundations of a permanent unification can be laid. That, fortunately, is merely a technical problem. As such it will be hard enough to solve, but the fact that on the political side unity is complete, no Allied State desiring extension of territory or any other privilege, and all of them seeking only the destruction of Hitlerism, obviate far greater possible difficulties.