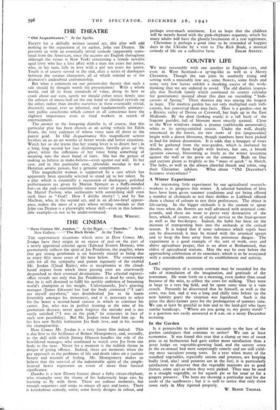 THE supernatural situations which arise in Here Comes Mr. 7ordan have their origin in an excess of zeal on the part of a newly appointed celestial agent (Edward Everett Horton), who prematurely collects the spirit of Joe Pendleton, the pugilist, when that gay young gentleman is on heavenly record as being due to enjoy fifty more years of life here below. The contretemps calls for all the sympathy and potent ingenuity of the exalted Mr. Jordan (Claud Rains), who is receptionist at the cloud- based airport from which those passing over are courteously despatched to their eventual destinations. The celestial registry- office reveals not only that Joe Pendleton is dead by error, but that he is still destined to fulfil his earthly ambition of becoming world's champion at his weight. Unfortunately, Joe's grieving manager (James Gleason) has had the body cremated (" I can't see myself anywhere," says disembodied Joe as he hunts feverishly amongst his mourners), and it is necessary to select for the boxer a second-hand carcase in which to continue his career. Joe, who was in perfect training at the time of his premature decease, never quite forgives the mistake and is not easily satisfied (" I was in the pink," he reiterates in face of each new possibility). But Mr. Jordan twice fixed him up. In his first new fleshly habitation Joe finds love, and in his second the championship.

Here Comes Mr. Jordan is a very funny film indeed. This is due first to the brilliance of Robert Montgomery, and, secondly, to the skill with which Jimmy Gleason handles the role of the bewildered manager, who continued to watch over Joe from one body to the next. Never for a moment is the ticklish theme in danger of giving offence. Indeed, there are moments when the gay approach to the problems of life and death takes on a curious beauty and warmth of feeling. Mr. Montgomery makes us believe that the survival of the indomitable spirit of the simple- hearted boxer represents an event of more than farcical significance.

Dumbo is a new Disney feature about a baby circus-elephant, who triumphs over the shame of his ludicrously large ears by learning to fly with them. There are tedious moments, but enough sequences and songs to amuse all ages and tastes. There is knockabout comedy, satire, some lovely designs in colour, and

perhaps over-much sentiment. Let us hope that the children will be merely bored with the pink-elephants sequence, which for many adults will have the ghastly fascination of a real nightmare.

Christmas is perhaps a good time to be reminded of happier days in the Ukraine by a visit to The Rich Bride, a musical

comedy of life on a collective farm. EDGAR ANSTEY.