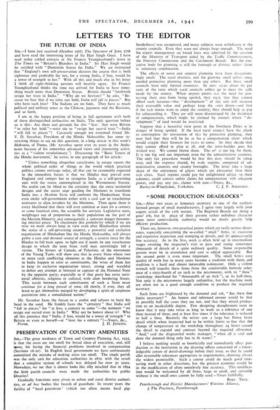 Snt,—The great weakness of Town and Country Planning Act, 1932, is that the areas are too small for broad ideas of execution, and, still more, for facing the financial problems involved in compensation (Sections 18-20). In English local government we have continuously committed the mistake of making areas too small. The single parish was the only unit for education authorities in 1870 with the result that a complete system of schools was delayed for over 3o years. Nowadays, we see that it almost looks like silly mischief that in 1894 the little parish councils were made the authorities for public libraries!

Gradually functions were given to urban and rural district authori- ties, or ad hoc bodies like boards of guardians In recent years the futility of " local patriotism ' (which too often means local pig-

headedness) was recognised, and many subjects were withdrawn to the county councils. Even they were not always large enough. The need for expert management on broad lines was admitted by the creation of the Ministry of Transport aided by the Traffic Commissioners, the Forestry Commission and the Catchment Boards But the exe- cutive body for planning is still the borough or district, unles' there is voluntary combination.

The effects of town and country planning have been disappoint- ingly small. The rural districts, and the growing small urban ones, needed protective planning more than any others But these small councils have only limited resources. In mos- cases about 8o per cent, of the rates which rural councils collect go to meet the calls made by the county. When anyone points out the need for pro- tecting their area from being spoiled, they reply that they cannot afford such luxuries—that development" of any sort will increase their assessable value and perhaps keep the sates down—and that if the rich towns want to enjoy the country, they should help to pay for safeguarding it. They are still more discouraged by .he incidence of compensation, which might be claimed by owners where " de- velopment " of land would be restricted.

Suppose that a beautiful view point in the Northern Dales is in danger of being spoiled. If the local rural council have the pluck to contemplate the prevention of this by protective planning, they may find that they will be let in for a compensation damn, which would cripple their finances for years to come. So they decide that they cannot afford to plan at all, and the jerry-builder goes his wicked way. We cannot blame them. The job is too big for them. It is too big and too important even for the administrative counties. The only fail procedure would be that this duty should be taken over, and the expense shared, by wide regions, composed of ad- ministrative counties and county boroughs. The latter take a large share of the enjoyment of places which are pleasanter than their rich cities. Such regions could pay for enlightened advice on their schemes, could contest unfair claims for compensation vith adequate power, and pay any just claims with ease.—Yours, &c., Burley-in-Wharfedale, Yorkshire. C. J. F. ATKINSON.