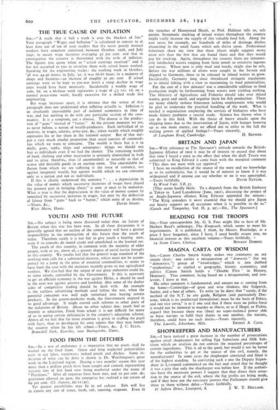 comments on my simple chart: one carries a misauotation of " domestic" (for my " democratic ") group of " know:edges," which is .hen dubbed " tendentious," as applied tc geography, history, economics, and politics (Canon Smyth holds a "Double First in History, Honours). That comment; being based on a misquotation, and irre- levant, I leave at that.

His other comment is fundamental, and amazes me of coming from the home—Cambridge—of great and wise thinkers, like Sidgwick, Sorley, and ,a host of others. To write (as he does) that " surely, if the method of the N.T. be any guide, Religion (and particularly Doc- trine, which is its intellectual formulation) must be the basis of Ethics, and not vice versa," is as if one said that if there were no police force it would not be immoral to murder or thieve, or as if Hegel, or Fichte, argued that because there was (then) no super-national power able to force nations to fulfil their duties to one another, the nations, therefore, could have no such duties.—Yours sincerely,