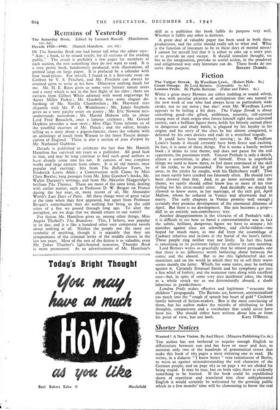 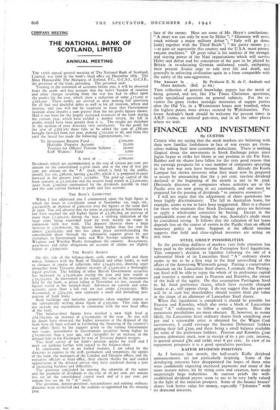 THE author has not bothered to acquire enough English to differentiate between was and has been or sneer and leer, to mention only two of the hundreds of grammatical errors that make this book of 163 pages a most irritating one to read. He writes, in a didactic " I know better " vein reminiscent of Berlin, to warn us against misunderstanding the real character of the German people, and on page 163 as on page 1 we are chided for being stupid. It may be true, but on both sides there is evidently something to be learned. If the book could be republished shorn of repetition and translated into clear unhyphenated English it would certainly be welcomed by the growing public which in a few months' time will be clamouring to know the real

face of the enemy. Here are some of Mr. Heyst's conclusions: " A short war can only be won by Hitler "; " Germany will never crack without a major military defeat "; " Italy will go down [only] together with the Third Reich "; " Air parity means 3:1 —to gain air superiority this country and the U.S.A. must possess ioo,000 machines." Of great value is his analysis of the strength and staying power of the Nazi organisations which will survive Hitler and defeat and his conception of the part to be played by Britain in re-educating German uniformed youth, extirpating their present Asiatic urge to rule over life and death, and generally in enforcing civilisation again in a form compatible with the safety of the non-aggressive.

The Answer is . . . By Professor E. N. da C. Andrade and Mona Andrade. (Bell. 3s. 6d.) Tins collection of general knowledge papers has the merit of being general, and not, like The Times Christmas questions, really specialised questions on general subjects. For the re- viewer the game evokes nostalgic memories of supper parties after the Old Vic. in a Westminster house now bombed, when the highest points were always secured by Wykehamists. Pro- fessor Andrade's book should be welcome for present times in A.R.P. rooms, on isolated gun-sites, and in all the other places where we wait.